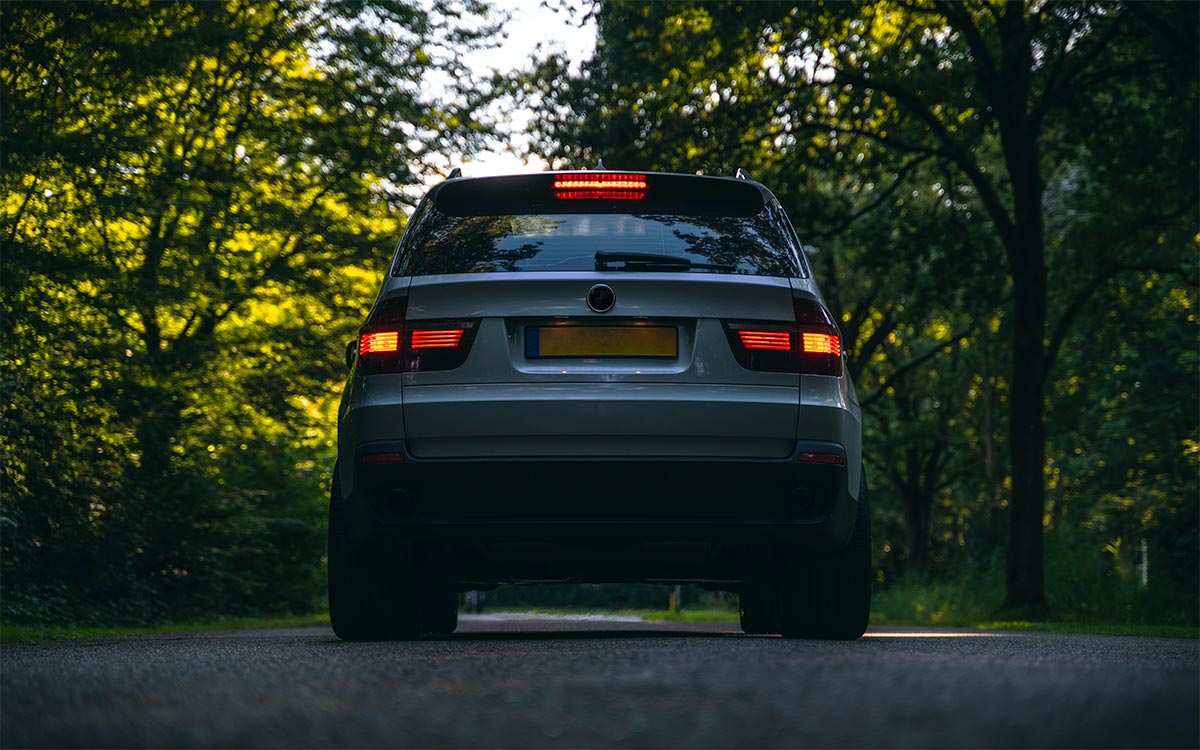 The Panoplia.org Soft Skills and Tactics (SST) course includes a five-topic lesson called “Loadout Levels.” Some refer to this wider concept as “Lines of Gear.” We make the following statement in the introduction to this lesson:

As much fun as it is to keep up on the latest tactical gear and to acquire the best you can afford, we’d encourage you to carefully consider every purchase. Resist the temptation to buy what’s “in” among those who want to be seen by others as serious tactical operators. Instead, let every piece of gear, equipment, and every supply have a set purpose in your overall loadout levels philosophy. Above all, know your gear and equipment. Know what it is, where it is, how it works, and when it needs to be deployed and for what purpose. The loadout levels concept is not about acquiring gear. It’s about having what you need, when you need it, and knowing how to get your hands on it within seconds. An understanding of the overall loadout levels concept will dramatically enhance your ability to thrive in any situation.

Philosophy and concept are two key terms mentioned in the paragraph above. We’ve broken the overall Loadout Levels concept into five sections. Each of the Loadout Level sections in the SST course has a reference card that’s explained in detail within the course. We’ve combined the various reference cards into an eight-page, high-resolution PDF document that you can access here. Click on the image below to download it. 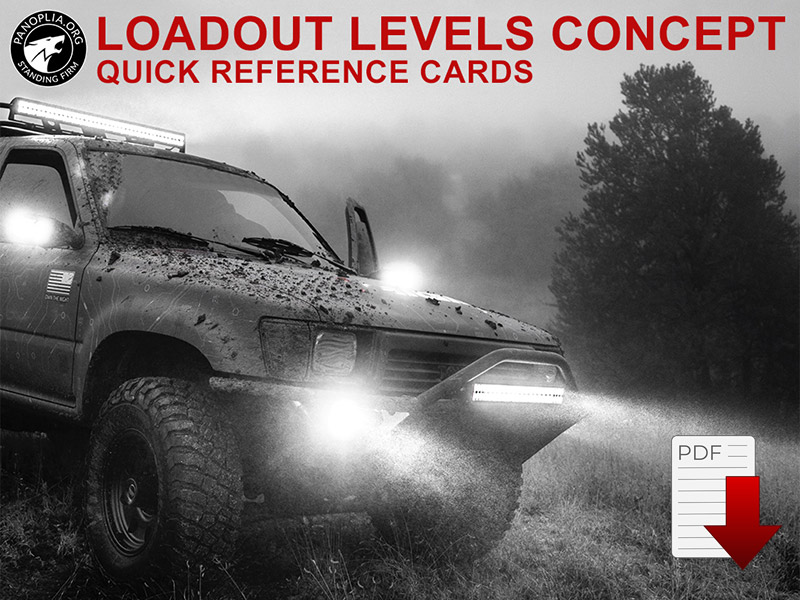 As you carefully review this PDF document, you’ll understand that the LL-3B bag has a very specific place in the overall Loadout Levels Concept. It can, to some degree, serve as a stand-alone item, yet in the overall concept it’s intended to extend your LL-3A bag from lasting 21 days to lasting almost two months. Please refer to the SST course Topic 01.02.04 for more information.

We last posted a LL-3B update article a year ago on August 26, 2020. Not much has changed in the way of contents, yet we have changed the way we carry the LL-3B contents in our vehicle.

In the document available above, we outline the importance of having four essential categories within each Loadout Level. These include:

The one exception is that we generally don’t include communications devices in LL-3B since it’s intended to augment LL-3A which does include a secondary and often a tertiary communications device. We and others have learned the hard way that not having these essentials in your Loadout Levels or Lines of Gear can mean the difference between life and death.

The specific items within your Loadout Levels that meet the four essential categories, as well as other needs that you have identified, should be based on your personal preference. This is also true with how you choose to load and carry your gear and supplies.

The image below shows our LL-3B as it was carried in our 2003 Honda Pilot for years. The gray sheet we used to obscure the items from those who may look into the vehicle has been removed for the picture. 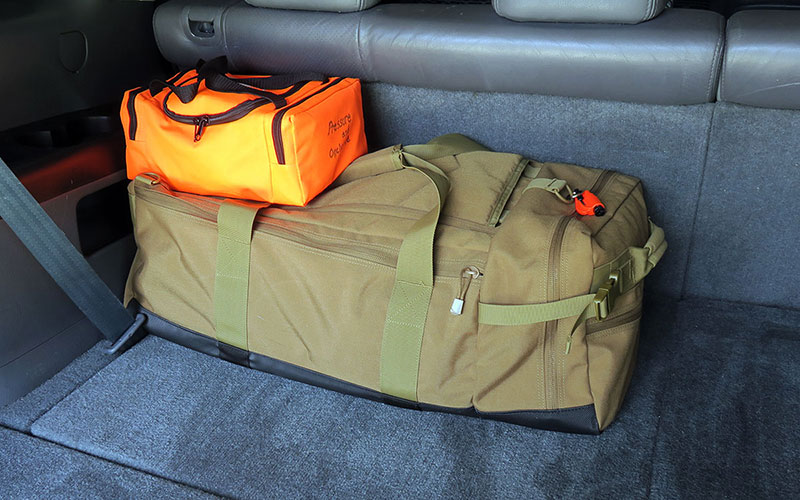 We recently chose to update how we pack our LL-3B in our vehicle. The image below reflects the change. 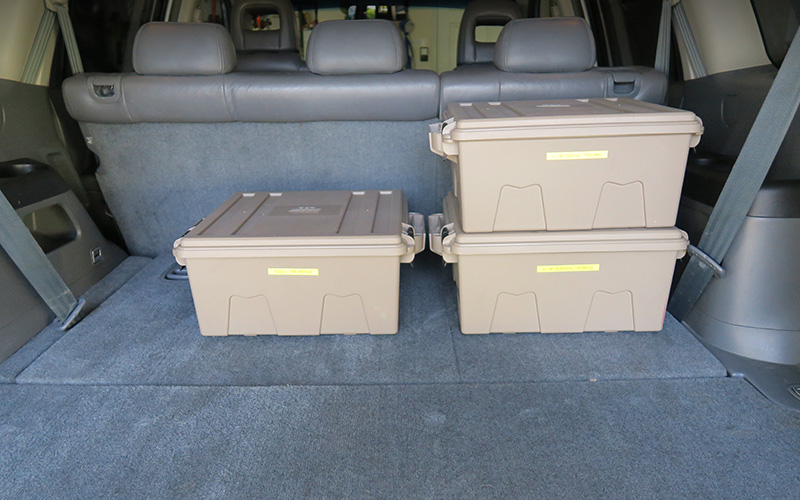 The two MTM ACR8-72 Ammo Crate Utility Boxes on the right hold everything that was contained in the large, OD green duffle as shown above. This includes the large, orange trauma kit. Note that we do have a complete IFAK (Trauma Kit) in the front of the vehicle for quick access. The MTM box to the left is not strictly part of the LL-3B. It contains tools and a tire repair kit as outlined in the article called “Ryobi Air: Back on the Road Fast” that was posted on 10 February 2021.

The decision to house our LL-3B contents in two MTM cases rather than in a single duffle had nothing to do with any conceptual or philosophical shift in thinking. This was simply a practical decision for us. The fact is, we often have to move our LL-3B out of the Pilot for a few hours at a time for a variety of reasons. This includes carrying 4×8 sheets of plywood and other construction supplies.

Our LL-3B duffle weighed about 60 pounds. Moving this in and out on a regular basis was a chore. Splitting the contents into two means that moving the MTM crates is far easier. In addition, the MTM crates lock into one another and take up less space. We also find it easier to quickly access the gear and supplies in this configuration. As you compare the two images, note that the large trauma kit that would not fit within the duffle does fit into one of the two MTM crates.

The downside is that the MTM crates are not as portable as was the duffle, which included shoulder straps. To address this, we placed a good-size backpack into one of the MTM cases. It won’t fit everything, yet in the event that we have to ditch our vehicle and proceed on foot, see page three of the document available for download above for when this might be necessary, we could pack some of the essentials from our LL-3B into this backpack for the relocation.

If there were enough passengers in the vehicle to carry the near-empty or empty MTM crates, they may be very helpful at the next location since they are sealed with an O-ring. Food and other items could benefit from being stored in the tight seal these crates provide. The sturdy crates themselves weigh about 3.5 pounds each when empty.

The bottom line is that as long as you understand the overall Loadout Levels concept, it’s up to you what gear and supplies you carry and how you carry them. This will be different based on your age, location, needs, vehicle, and several other factors. Please keep in mind, however, that knowing your gear and knowing how to access it quickly is far more important than having tons of equipment with which you are unfamiliar and that has been thrown into a vehicle in such a way that you have to spend a long time finding what you need during a crisis or emergency.

The images below show how we pack our LL-3B into the two MTM cases. 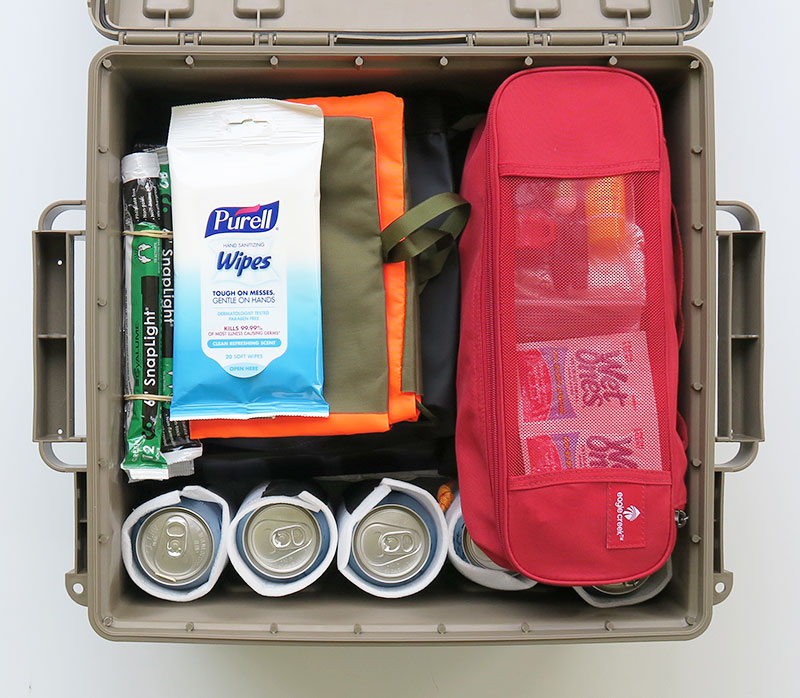 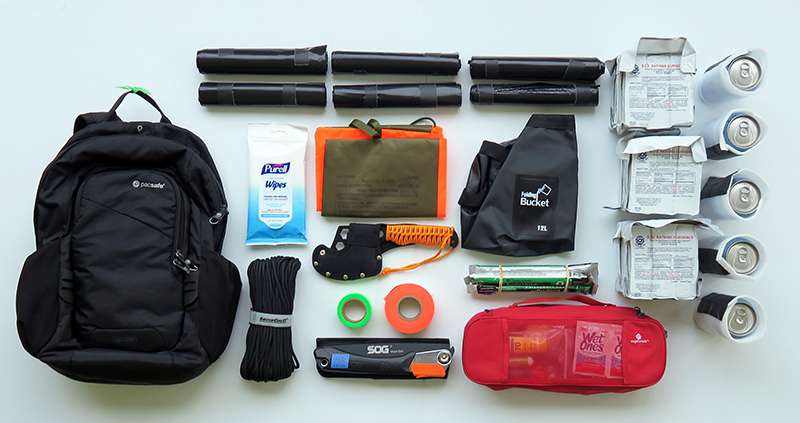 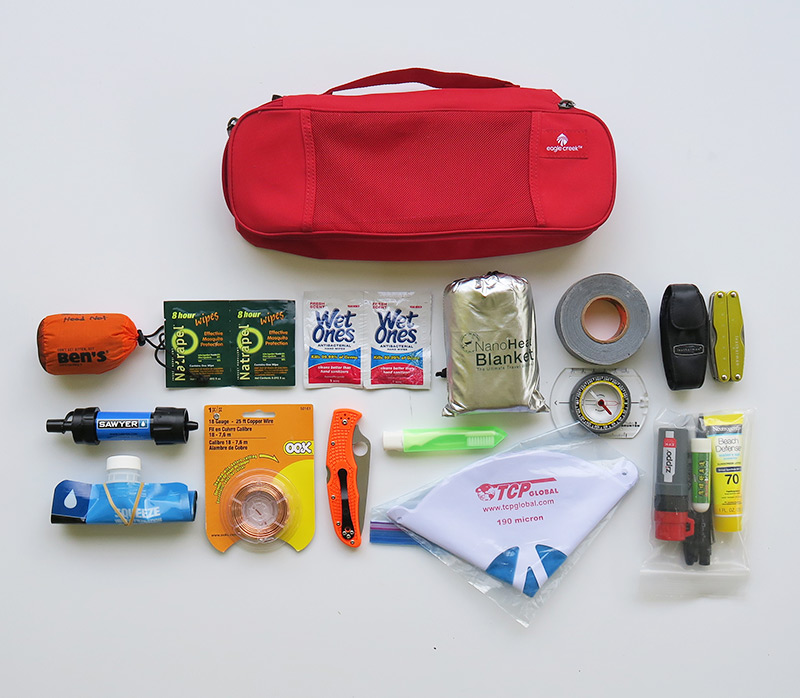 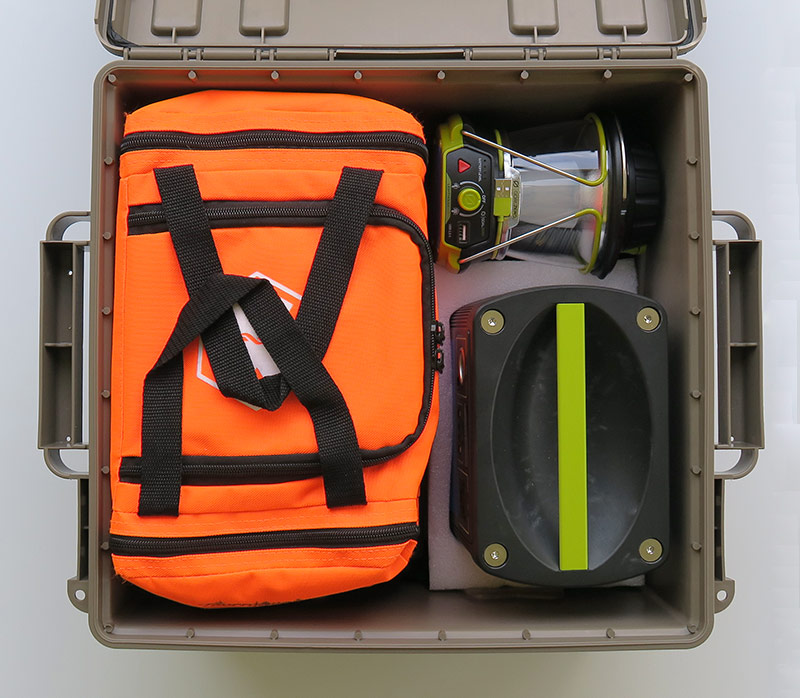 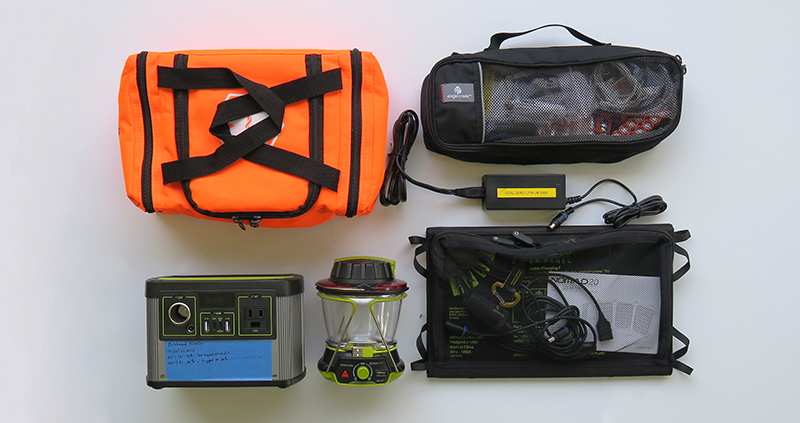 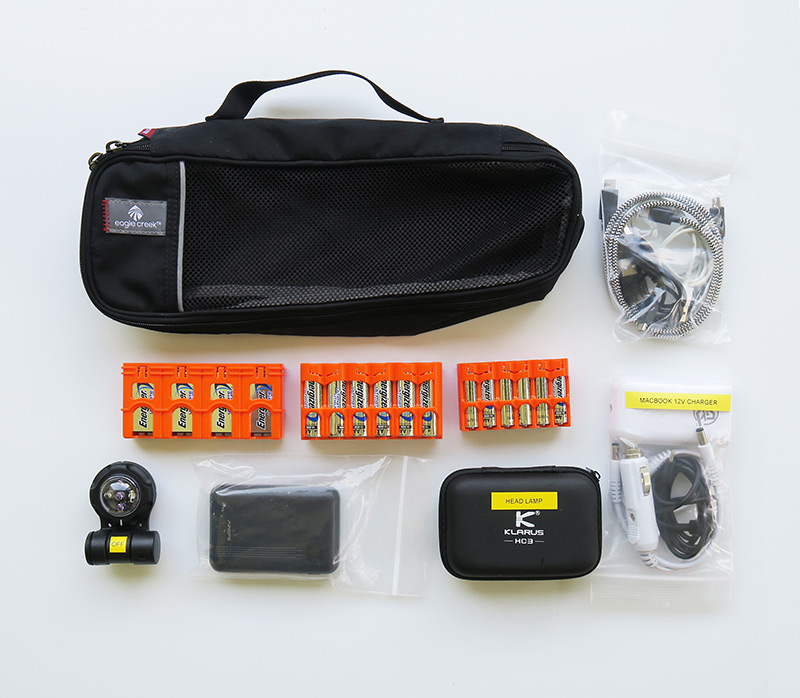 We’ll be reviewing some of the gear and supplies shown above in future articles. In the meantime, we encourage you to master the overall Loadout Levels concept as shown in the document available above for download. We also encourage you to consider taking the Panoplia.org Soft Skills and Tactics (SST) course. This places the overall Loadout Levels concept into an easy-to-understand context.