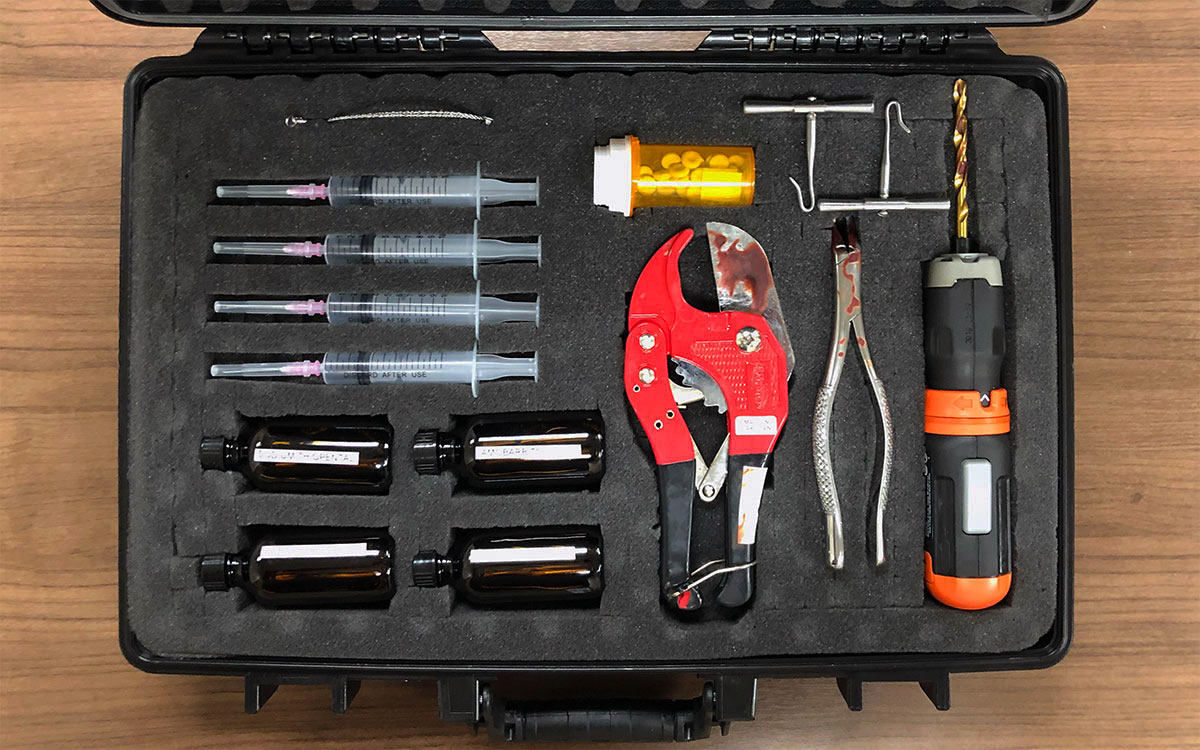 Reports of detainment and aggressive interrogation carried out by authoritarian governments overseas are increasing. In the last two years we’ve been directly involved in crisis management efforts involving more than two dozen cases. In just the last few months we’ve been directly involved or have consulted on four cases. These incidents have lasted from one day to longer than a month. The most recent have involved hostile interrogation, more than a week of psychological torture, and in one criminal case days of physical torture.

Based on our own interrogation experiences in the Islamic world and from the cases mentioned above, we’ve updated both our on-site and online security training to reflect many lessons learned. The image above shows a set of tools we’ve developed for our on-site training. These are inert, and are never removed from the case during training, yet the impact of having this case open on a table next to the trainee being interrogated is unmistakable. On closed-circuit footage they can be seen glancing at the case and its contents over and over again as they consider their responses to difficult questions. This slightly enhances the stress inoculation level during training. Stress inoculation is intended to help individuals recall their training when they need it.

In most recent cases overseas individuals detained are forced to surrender their digital devices for forensic examination. You might be thinking, “No problem, I have a sixteen-digit alpha-numeric password that no authoritarian government could ever break.” The reality is that within minutes of being taken, detainees are forced to hand over the passwords to their digital devices. They’re later forced to surrender the passwords to the email accounts discovered on the devices. In several of the cases those being detained and interrogated were not permitted to contact their embassy. They were also threatened with harm to themselves, family members, or to those with whom they were detained. It’s also not uncommon for there to be no official record of the detainments or interrogation sessions.

The increase in incidents like these has given rise to inquiries about training intended to help individuals handle aggressive interrogation. Those seeking such training may have years of hard skills experience, yet little or no training or experience in soft skills and tactics. In such cases we suggest that stand-alone training aimed at enduring detainment and interrogation can be counterproductive. It tends to focus one’s attention on interrogation, and to ignore the many other soft skills and tactics intended to help one operate in non-permissive areas or conflict zones in such a way that they can avoid being detained or captured in the first place.

We recommend that handling interrogation should be taught in the context of comprehensive soft skills and tactics training. This is the case for our on-site training that’s not open to the public, as well as for our online Soft Skills and Tactics (SST) course that was released to the public on 01 January 2020. You can see in the image below how interrogation training fits within forty-four other SST subject matter areas.

There’s a good reason why thirty soft skills and tactics subject matter areas are addressed in the SST course before interrogation. This helps ensure that small teams or individuals operating in low-visibility roles in non-permissive areas or in conflict/civil war zones have the best chance of doing so while avoiding confrontation, detainment, or capture. In the event that they are detained or captured and must endure aggressive interrogation, they have many other skills and relationships to fall back on.

It’s rare for even highly-skilled tactical operators to have training or experience in soft skills and tactics, or to have years of experience operating in low-visibility roles where such skills are necessary. Given the current political climate, we encourage you to consider taking the SST course. You can do so now at a drastically reduced introductory price.

For more information on the SST Course, click HERE