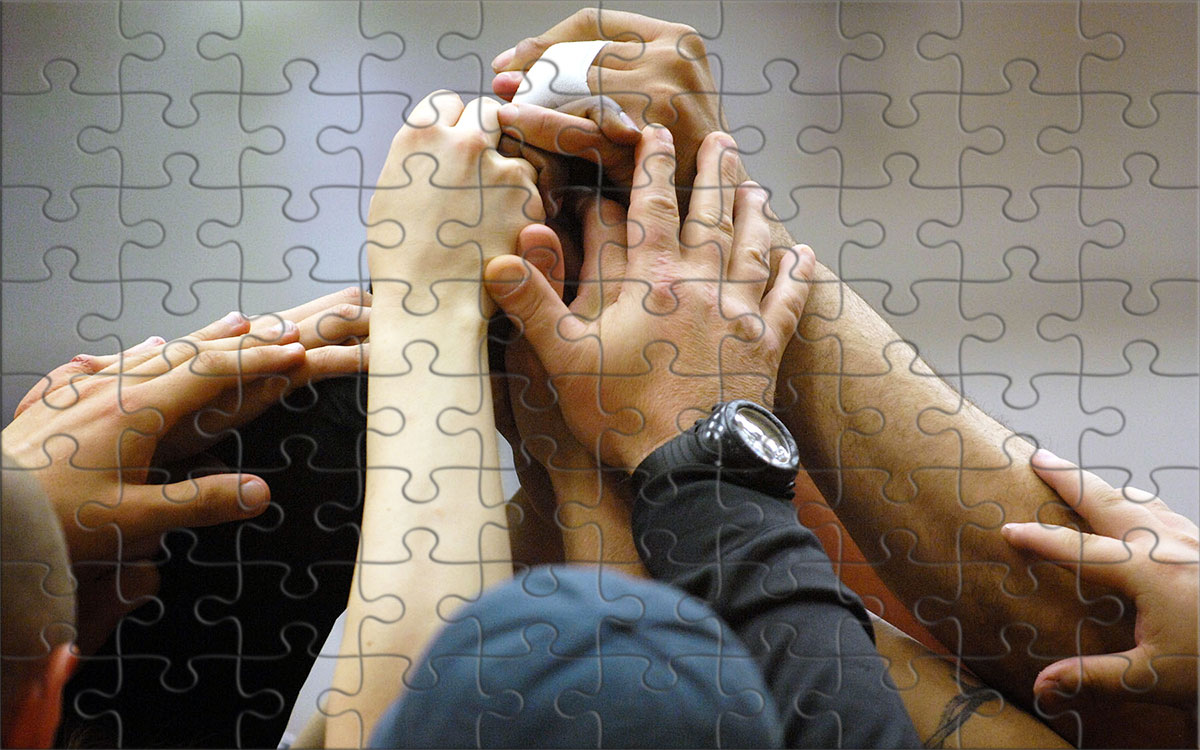 Some goals can be achieved on one’s own. With strength, determination, and hard work it’s amazing what an individual can accomplish. More complex objectives, however, generally involve a team. To a large degree, the chances that a team will achieve its objective depends on leadership. The more complex and challenging the objective, the more necessary it is that effective leadership is involved.

The terms leader and leadership are among those that many speak and write about, but few define. Dictionaries are of little use in this regard. They often define a leader as one who leads. They define leadership as the office of a leader. Not long ago I spoke with a colleague who attended a leadership development course with one of the most successful corporations in the United States. I asked him how they define leadership. His response was that they consider a leader to be one who has influence over others.

Whether it’s dictionaries or corporations, few provide a definition of leadership. Instead they offer descriptions like those noted above. How can one expect to be an effective leader if there’s no agreement on what a leader is, or what he or she is supposed to do? Ironically, not providing a definition of a leader or outlining how one who holds such a position should operate, in itself represents a lack of leadership.

In the Panoplia.org Soft Skills and Tactics (SST) course we define effective leadership in the following way: 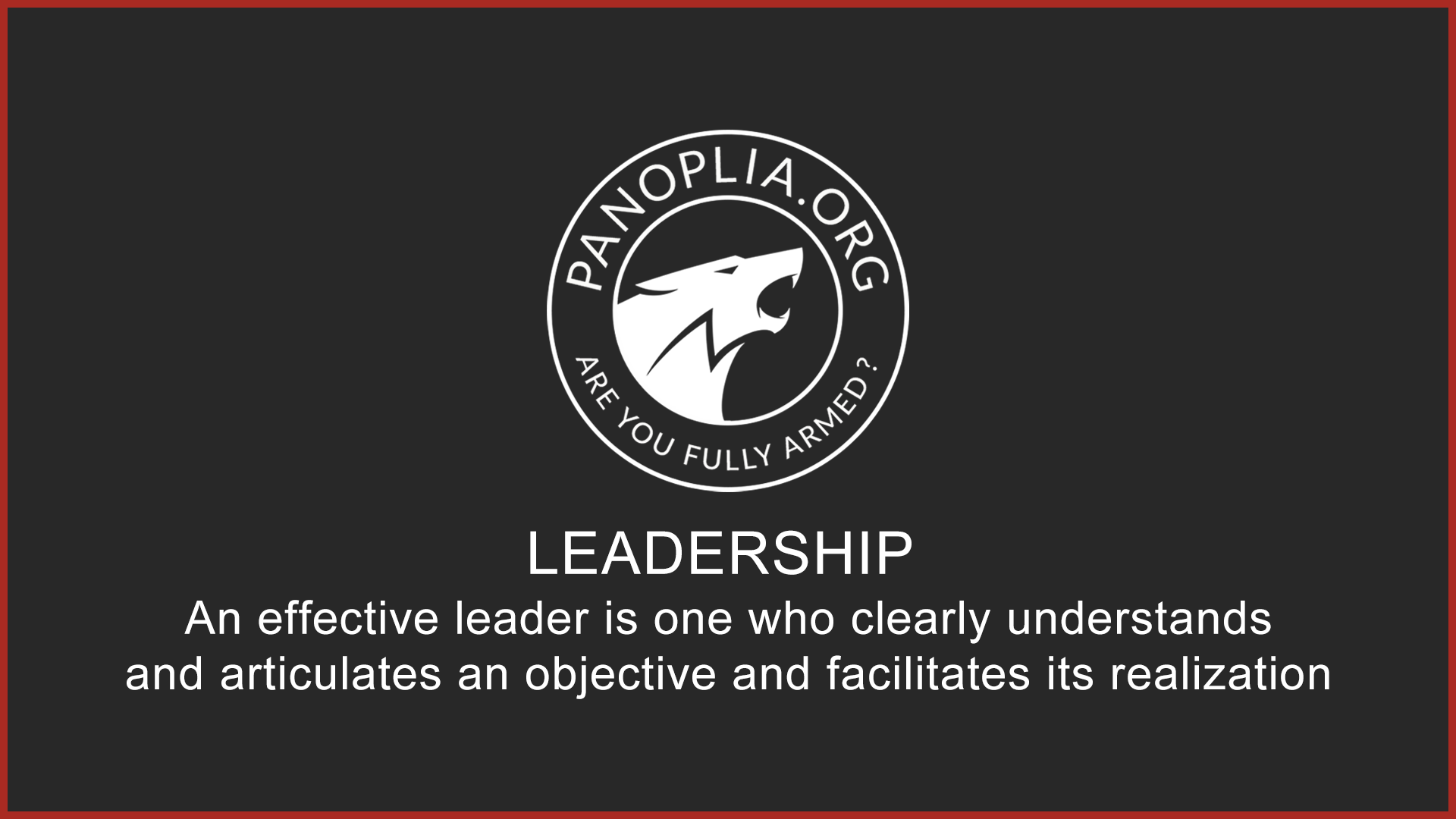 Let’s break this definition down.

Leadership begins with an objective – something that needs to be accomplished. This might be winning a game, apprehending a dangerous felon, tactically clearing a room, or any other number of complex and important tasks. The first step of effective leadership involves an individual who clearly understands the objective. He or she needs to know what success looks like, and what stands in the way. An effective leader has a mental picture of the end goal and understands the challenges involved. This is not easy, and it’s the reason that not everyone is a leader.

The next step involves communication skills. Since a team is necessary, an effective leader needs to be able to articulate, or explain, the final objective to the team. This involves placing the objective into context. How will achieving the objective help? Why is it important? Why should team members be motivated to participate at a high level? How will it benefit them and others? An effective leader will be able to share answers to these questions in such a way that the team members will want to see the objective achieved. The lack of inspiration is a major factor in many operational failures.

Only after the first two steps noted above are in place can the next, and most critical, step be addressed. Once the objective is clearly outlined, and once it’s articulated in such a way that team members are inspired and motivated to reach it, an effective leader will do everything he or she can to facilitate its realization.

The ancient root of the word “facilitate” means to make something easier. There’s no question that complex and important objectives are generally not easy to achieve. It’s likely that few involved will have an easy time. A key to effective leadership, however, is for a leader to ensure that each member of the team not only understands the overall objective and is motivated to see it reached, but that each member understands:

If you’ve ever played on a sports team you’ll likely know that to the degree you understand your role and have the ability to play it, you play with confidence. When you don’t understand what you’re supposed to do, or sense that you’re not up to the part, you will be plagued by fear, doubt, and uncertainty. It needs to be understood that in the latter case, it’s the coach, not the player, who’s at fault.

An effective leader will not place a team member into a position that the player does not have the potential to fulfill. It may be the case that the part is beyond his or her past accomplishments, yet if the leader senses the potential is present a degree of risk is acceptable. Believing in a team member’s potential and seeing it play out is an important part of leadership. Just as important is knowing when things are not going well and having the courage to pull a player out. Doing so with kindness, respect, and with the best interest of the player and team in mind is key. A team member who understands the importance of the objective and is inspired to see it accomplished will generally not only be okay with being pulled, but will ask if there is another way in which he or she can help.

The most respected leaders are those who work as hard as anyone else to see the objective realized. It’s also key that team members sense that they are trusted and valued. A great leader will never belittle a member of his or her team. Finally, a respected leader is one who will absorb any outside heat or criticism on behalf of the team. He or she will ensure that the team member need only be concerned with the part he or she has to play, and nothing else.

There are few things that will facilitate, or make easier, a team member’s role than him or her knowing his or her part in achieving the overall objective. Look at the image above for a moment. This is a puzzle made up of eighty separate parts. Each part, no matter how plain or intricate, is necessary for the puzzle to be complete. At the beginning of an endeavor an effective leader will ensure that each team member knows how the final objective will look, why reaching it is important, and how each player is necessary in the process.

If you’re a leader, no matter what your particular role involves, consider applying the definition of an effective leader as it’s outlined above. You might just find that it will help you and your team more effectively and efficiently realize the objective with which you have been entrusted.