As protests and riots continue, and as calls to defund law enforcement agencies are foolishly implemented, there’s little doubt that violent crime will increase in the United States. This will likely include many more shooting incidents in 2021 and beyond.

Active shooter incidents have been a problem in the U.S. and elsewhere for a number of years. In response to this growing issue, great efforts have been made to promote the, “Run, Hide, Fight” approach to dealing with shooting events. 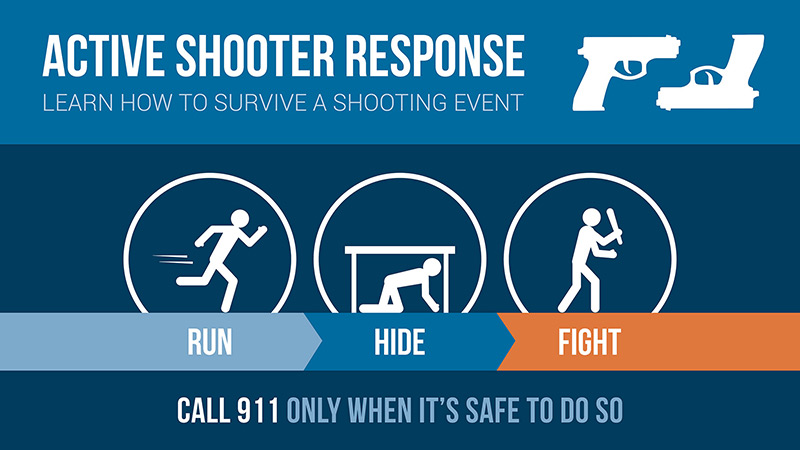 Post-incident analyses indicate that this approach has proven problematic for a number of reasons. Primary among them is the wisdom found in the adage, “Movement without observation may result in death.” Training civilians to run the moment they hear gunfire discounts the fact that it’s not always possible to immediately determine the location of the shooter or shooters. Sounds, especially very loud sounds, have a way of bouncing around. It can take time to locate the source. Running as soon as shots are heard may lead one to run straight into, or closer to, the shooter or shooters.

Even if one runs away from a shooter, doing so while the weapon is aimed in one’s general direction can draw the shooter’s attention. It’s almost as if you’re challenging the shooter to hit a large moving target very close to his or her point of aim.

Another issue with the Run, Hide, Fight approach to dealing with shootings is the advice to hide. Government posters often use icons next to the three words. Many, perhaps most, of these posters show a person crouched under a table above the word “Hide.” Real-world incidents as well as training events indicate that in response to a shooting many individuals hide in plain sight of an attacker. Others choose a dead-end hiding place that the shooter can easily access. All this does is offer the shooter a number of easy targets.

Finally, the advice to “Fight” often focuses on overpowering a shooter. Again, real-world and training events indicate that tackling a shooter often allows them to keep shooting, even while struggling on the ground.

Based on our training events involving hundreds of participants, and on advice offered by law-enforcement professionals who’ve responded to active shooter or other shooting incidents, we’ve developed the FADE approach as shown in the image below. Note that you can click here to view and save a PDF version as well. 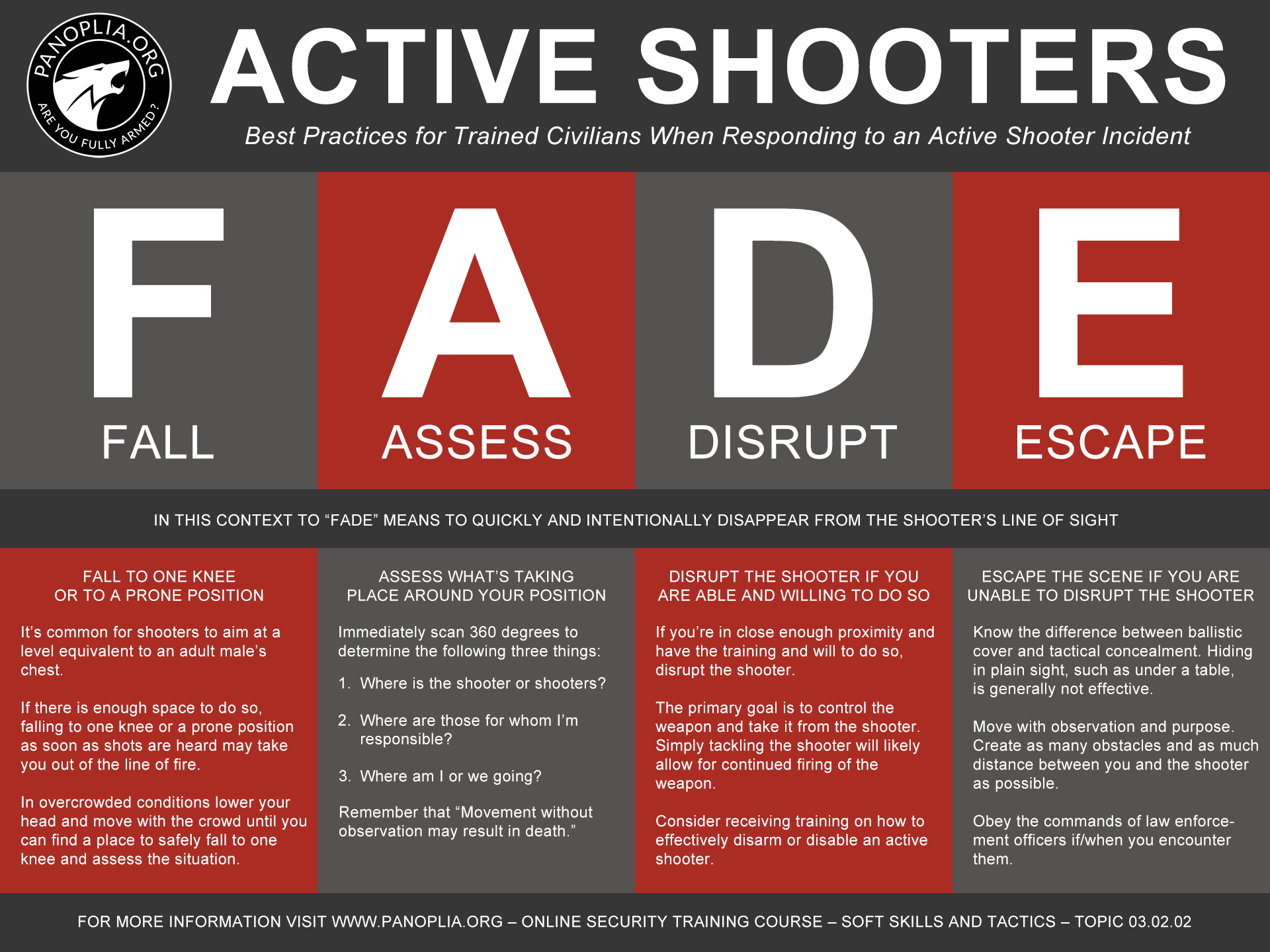 More information about the FADE approach can be found in the Panoplia.org online Soft Skills and Tactics (SST) course topic 03.02.02 (Active Shooters). This is followed by topic 03.02.03: Weapons Takeaway. We encourage everyone to take this course. The emphasis is on living in such a way, even in hostile environments, that you can avoid becoming involved in security incidents in the first place.

The nine-hour online SST Course trains individuals how to be prepared, how to navigate life in normal times as well as in the most extreme situations, and how to respond in case you find yourself in real trouble. It’s based on lessons-learned from those who’ve served in low-visibility roles in some of the world’s most challenging areas.

Whether it’s an active shooter incident or any other situation in which shots ring out, we encourage you to know how to respond. As political tensions continue to rise in 2021 and beyond, and as law-enforcement agencies are taxed to the limit, it’s more likely than ever that training in soft skills and tactics will be helpful to millions.