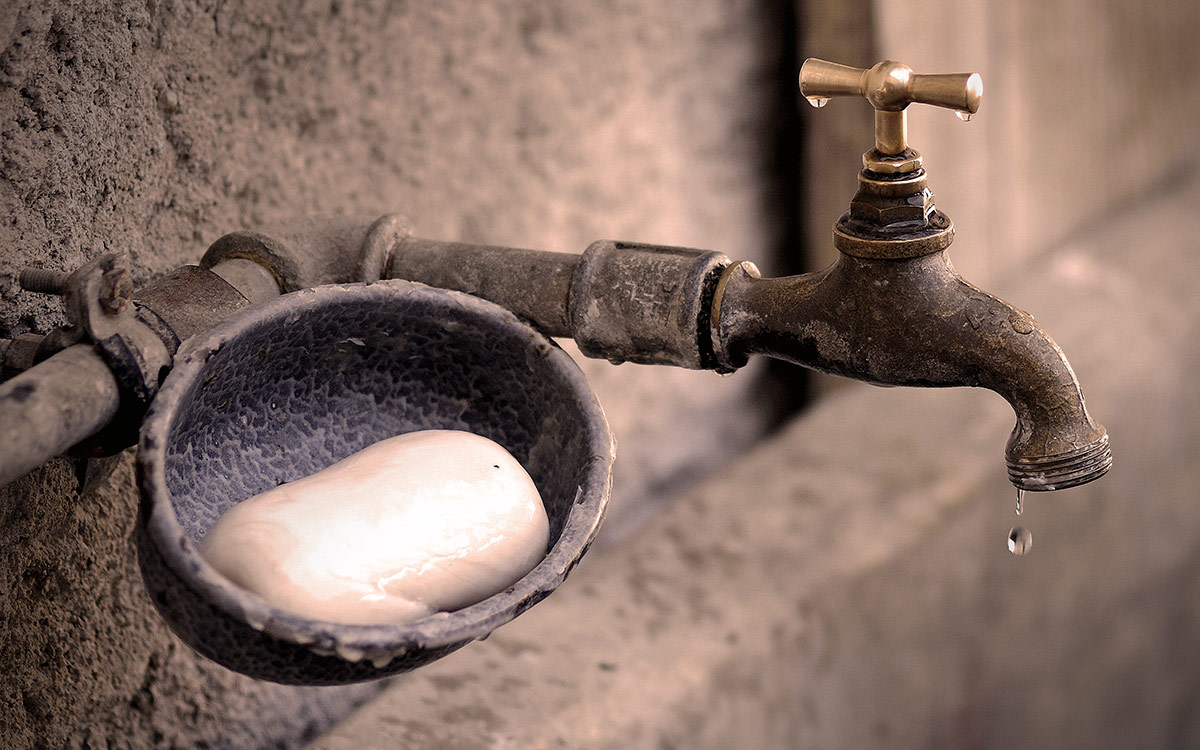 On February 5, 2020 we published an article in our Mindset category titled, “Preparation or Panic.” In it, we recalled the fact that during the 2002-2003 SARs outbreak in Asia protective masks were almost unattainable. We noted in that article that China was beginning to deal with something called the Coronavirus, and that there would likely be a shortage of masks again.

In the same article we noted the fact that during panic times ammunition prices are likely to rise. Here’s a quote from that article:

Whether it’s for ammunition or surgical facemasks, prices for items in high demand tend to drastically increase during a perceived or actual crisis. This leads to panic, hoarding, and shortages. It doesn’t take long during such times for high-demand items to be unavailable.

The image that appeared on the top of that article is shown here: 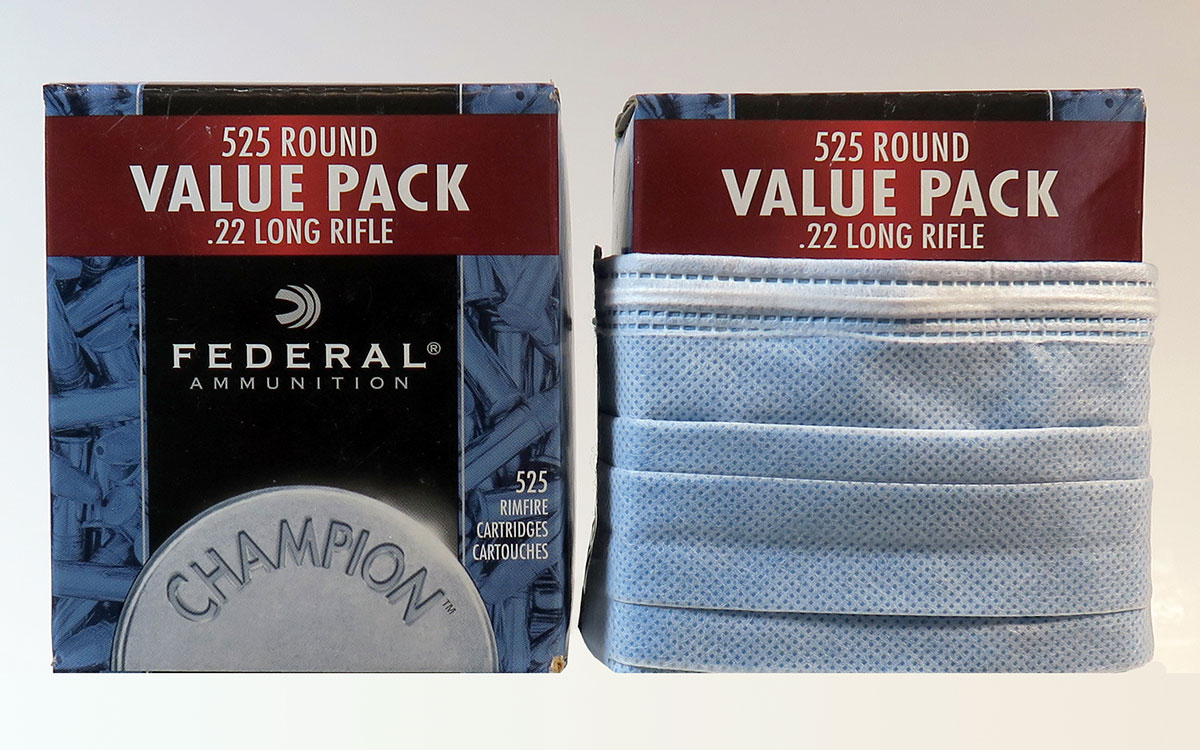 As the title suggested, the point we were making is that those who prepare in advance don’t have to panic when essential items are no longer available. We share this today not to boast about our own preparations, but instead to remind members of this principle again, and to suggest that you consider putting aside another item that may be scarce in the coming months or years. 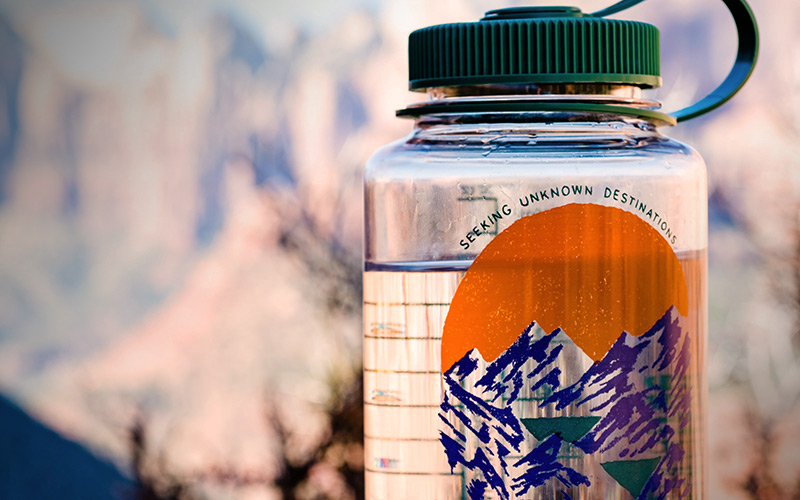 Water is essential to life. As much as you think you may die without them, you can live without access to bulk ammo and face masks for quite a while. Going without water or a beverage that contains it for more than a week, however, and you’ll be in real trouble. Go much longer and you’ll simply die.

With this in mind, planning for water shortages is a vital part of being well-prepared. It’s likely that water will flow freely from your faucet and hose spigot as it does now for many years to come. And yet, given the current political climate, there’s no telling what may occur. Any number of scenarios we won’t go into here could impact the availability of the clean drinking water we’ve come to depend on.

This being the case, it’s a great idea to set aside some water and to ensure that you have a few filtration options available. You don’t have to go crazy, just ensure that no matter what takes place you’ll have an immediate supply to last for a few weeks, and a filtration system that can be used thereafter to filter rain, pond, river, swimming pool, or some other large source of water.

There are some well-prepared individuals who’ve chosen to store up thousands of gallons of water in large, specialized drums. They also have hundreds of gallons set aside in smaller purpose-built containers. For example, I was at a Bass Pro Shop recently and noticed a “Jumbo Tainer” jerry can designed to hold seven gallons. These sell for about $20.00 each empty. We’ve chosen a slightly different route.

Our local Publix grocery store sells 5-gallon, BPA-free bottles of Zephyrhills spring water for about $6.00 each. We’ve chosen to set aside a dozen or so of these in our closet where they’re not subject to direct sunlight. If you stack them in creative ways they don’t take up a great deal of space. Twelve will provide sixty gallons of drinking water whenever needed. They can be rotated out every two years or so, or according to the schedule that you determine is best.

We’ve also stored tap water in 2.4-gallon containers in our garage. These are previously used cat-litter containers which have been thoroughly washed, and thus cost us nothing. They’re marked as HDPE-2, which is the same material used to make plastic milk bottles. We mark them with the date they were filled and with the words, “Not Intended for Drinking – Can be filtered in an Emergency.” We have eight filled now (about 20 gallons) and put another one on the shelf above our garage storage units each time we buy new cat litter. If nothing else, these can be used for bathing, or for flushing toilets. Since a gallon of water weighs about 8.3 pounds, we find these free alternatives easier to handle than the expensive 7-gallon jerry cans that weigh almost 60 pounds when filled. 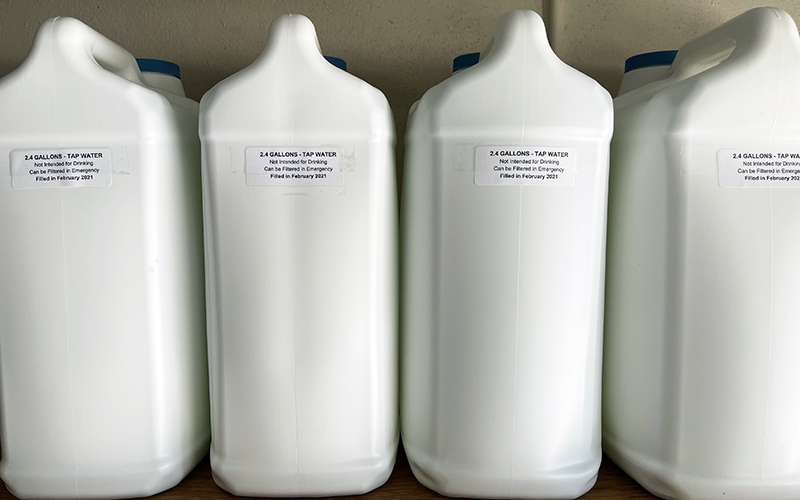 Aside from this we have numerous ways to filter the water found in the pond, canal, and swimming pools near our home. Other than LL-01 (Concealed on Body), each of our Loadout Levels has a water filtration tool. These include several Sawyer Minis, an MSR MiniWorks, several portable Katadyn units, and the large Drip Ceradyn Gravity Filter featured in our article posted on 28 October 2020. Some of these are shown in the images below. 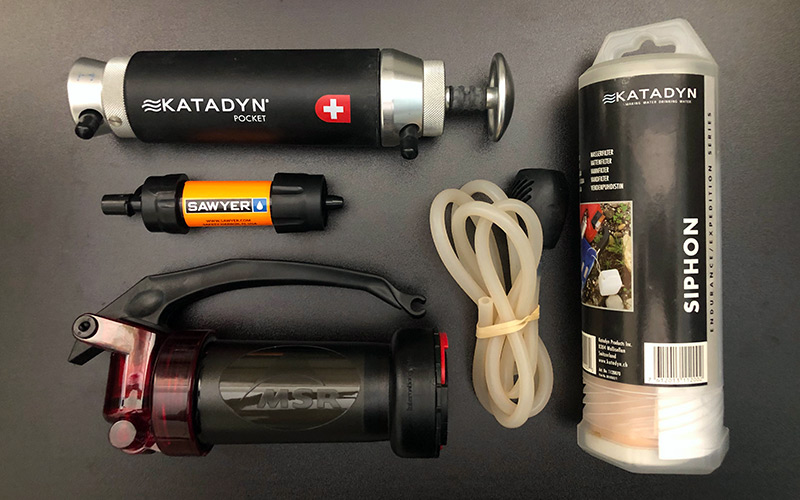 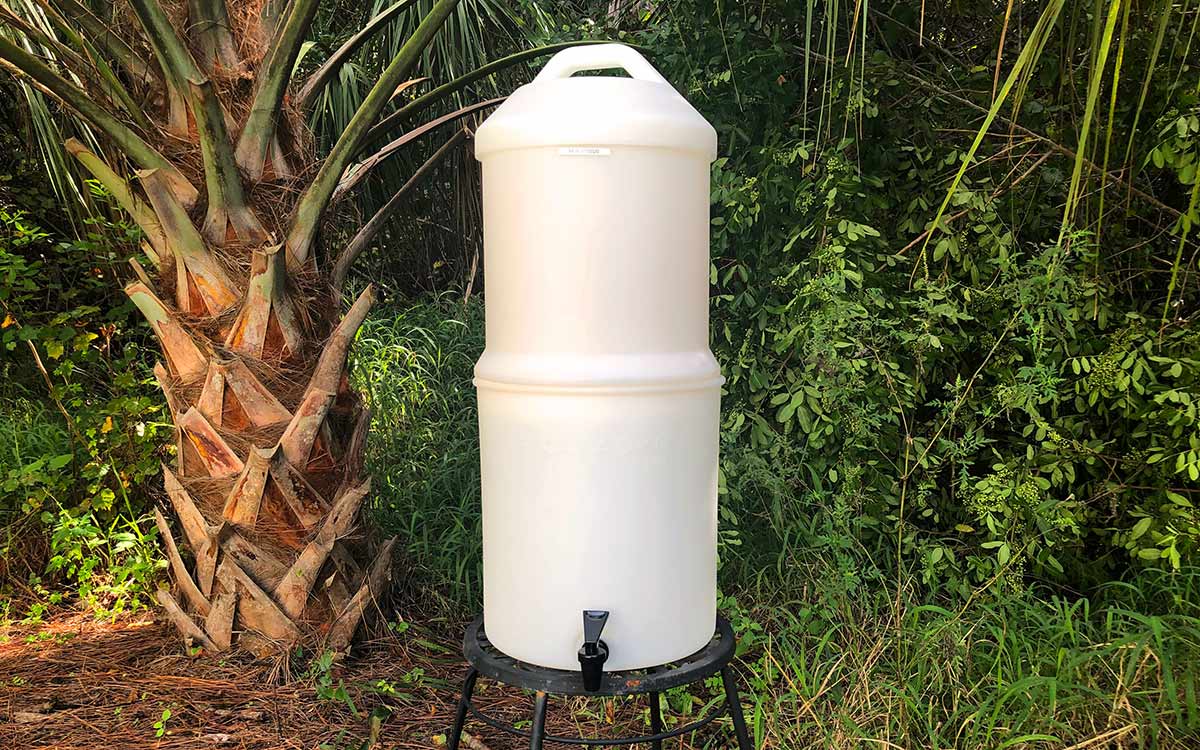 Again, the idea is to have enough clean drinking water on hand to last at least a few weeks, and filtration options that can last for months or years.

As noted above, water is essential to life. I’ve also recently learned that drinking more water per day than most people think necessary can dramatically improve one’s health and level of concentration. I know it’s somewhat unusual, yet I only drink water. I don’t drink alcohol, fruit juices, soda, or anything other than water. For years I would make do with fifty or so ounces of water per day, or far less than a half gallon. I’ve recently learned that this is not enough.

Based on research of some reputable sources such as the Mayo Clinic, I’ve learned that it’s ideal for an adult male to drink close to a gallon of water per day. That’s 3.8 liters. Since late last year I’ve made it a goal do drink about 4 liters of water per day. That’s 135 ounces, or just over a gallon. Although this does make one urinate more frequently, I’ve found that the benefits far out way any inconvenience. When I’m hydrated in this way my concentration level improves and I feel great. It wouldn’t surprise me if I even shoot better at the range.

In summary, what would happen right now if water suddenly stopped flowing from your tap, and bottled water was no longer available to purchase? Would you and your family have what you need to thrive? If not, we recommend that you begin now to set aside what you think is an adequate amount of water for your immediate needs, and consider purchasing at least one water filtration system. As we’re experiencing with ammo now, it’s difficult to predict what may be in short supply in the future. Since water is essential to life, it makes sense to be prepared in the ways outlined above.