There’s no question that we’re spoiled in the United States when it comes to firearms. We have so many choices and options that over the years shooters have settled down into camps of allegiance. It’s fun to see those who prefer one manufacturer over another debate with each other. It’s also fun to look at firearms advertising slogans. Almost everyone knows about “Glock Perfection,” but you may not be old enough to recall the old Heckler and Koch slogan, “In a world of compromise, some men don’t.”

One of my favorite firearms advertising slogans is Sig Sauer’s, “To Hell and Back Reliability.” This suggests that their products can withstand some pretty rough treatment and keep functioning. Before you get too upset and sense the need to comment on the relative reliability of Sigs, or lack thereof, it should be noted that this article is actually about footwear.

I quoted the Sig slogan because for the last eight years I’ve been wearing a particular model of footwear that may just live up to it, metaphorically rather than literally of course. It’s pictured above next to the German-made P228 that I received as a gift from dear friends several years ago.

The shoe is made by Timberland. It’s their Timberland Pro Titan Oxford model. It comes in a soft toe (pictured) and a safety toe version. I’ve had both. I prefer the safety toe, yet in 2016 I opted for the soft toe due to the fact that I travel internationally a good deal and this does not set off airport metal-detectors like the safety-toe model does. It comes in oxford (shown), or in black. I treat my oxford pairs with mink oil, which darkens them considerably. 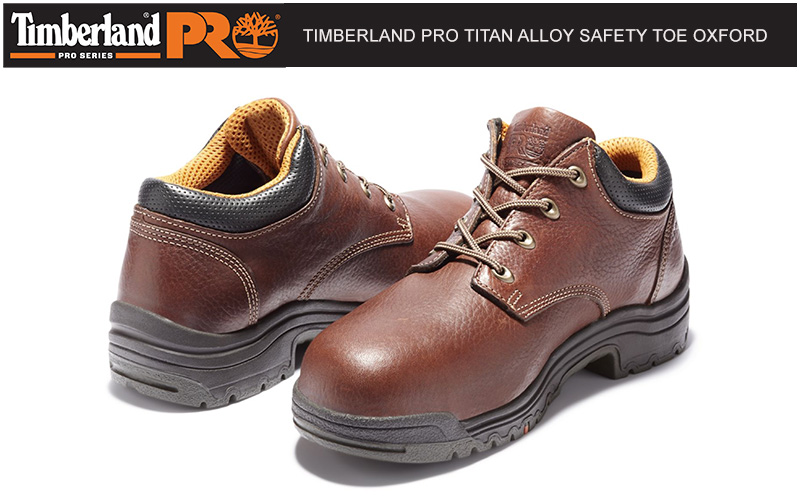 I purchased my first pair of these shoes, some call them low-cut boots, in January 2013. They’re among the most comfortable and supportive footwear I ever recall using. I’ve worn these almost daily ever since. I find that I can get by with these in business meetings as long as I keep them looking good with an occasional wipe-down using mink oil. The great thing is that they work well just about everywhere else you can imagine.

Back in 2016 I wore these while trekking through a jungle area in Southeast Asia. Despite very good planning, myself and a few colleagues lost our way. We had set our course based on local maps that proved to be unreliable.

As an aside, I should explain that I’ve lived and worked in close proximity to some of the deepest and most inhospitable jungle environments you can imagine. I can tell you first-hand that the way Hollywood portrays jungle adventures is completely false. They show scantily-clad westerners casually strolling through virgin jungle with little effort. These intrepid individuals then stop and rest against a tree or branch before continuing on. In reality, just about everything in such an environment wants to kill or eat you. If it’s not mosquitoes it’s ants, snakes, or any other number of creatures big or small. Lean against a tree in such settings and within minutes it’s a good bet that you’ll be covered with something trying to devour your flesh. Jungles are by no means for the faint of heart.

Back to our 2016 trek, after a number of hours pushing through some very rough and mountainous terrain, we made it back to civilization. While crossing some of the more difficult terrain, I was so thankful for the Timberlands I was wearing. When crossing streams or other wet areas my feet remained dry. When navigating through thick vegetation, my feet were well protected. After that experience I would not hesitate to wear these in any environment. It certainly wasn’t to hell and back, yet it was quite an experience, and the shoes proved to be 100% reliable. Had we been lost for days, I suspect having these would have made a tremendous difference.

By the time of this trek in 2016 my shoes were almost four years old. They looked great entering the jungle environment, but looked really bad when we emerged. They were torn up and had lost most of their coloring. The leather was deeply scratched, and the original light-brown color of the material was showing through. I cleaned these up the best I could to wear them during the remainder of my overseas trip.

On arriving back to the United States I went online and purchased another pair of the same model. The only difference was that I opted for the soft toe for the reason noted above. Sometime after receiving my new pair, I decided to try out some mink oil on the ones that were so badly beat-up in the jungle. To my astonishment, they looked pretty good. For the past four years I’ve used this jungle-beaten pair for yard work. I’ve not mink-oiled them for a long time, but I did so today. The before and after shots are shown below.

The replacement pair I purchased in late 2016 are the ones I wear to this day. At about $125.00 these are not inexpensive, and I’m pretty cheap. I use things until they no longer function as they should. After four years of wear, my current Titan Pros look great and function like new.

I purchased my Timberland Pros at Zappos.com. They offer free shipping, and if I understand correctly they also pay for return shipping in case you are unsatisfied or need a slightly smaller or larger size after trying them on.

You’ll not score any cool points with pro operators who wear more expensive and well-known tactical footwear, but if you’re looking for a tried and tested product that’ll serve you well in just about any environment, and for a very long time, we’d recommend that you take a look at the Timberland Pro Titan series in either oxford or black.