We receive direct reports concerning attacks and other security incidents from the teams and individuals we train and advise. This covers some very challenging locations around the world. We also receive daily reports from a number of other sources.

We’ve recently heard numerous reports of deadly attacks involving what some are calling “sticky bombs.” This often involves a two-person motorcycle team. They attach an improvised explosive device (IED) to a powerful magnet. They follow their victim(s) until they can get close enough to lean over and place the IED onto a metal surface of the vehicle in which the target or targets are traveling. They then ride off to a safe distance and call the number of the mobile phone that serves as a detonator. The package looks something like the image above.

The impact of such a device can be devastating. A Magnetic IED was reportedly used to kill five women and a child who were among those riding in a bus in Kabul last week. This comes after similar tactics were used in several other attacks over the past few months in Afghanistan. 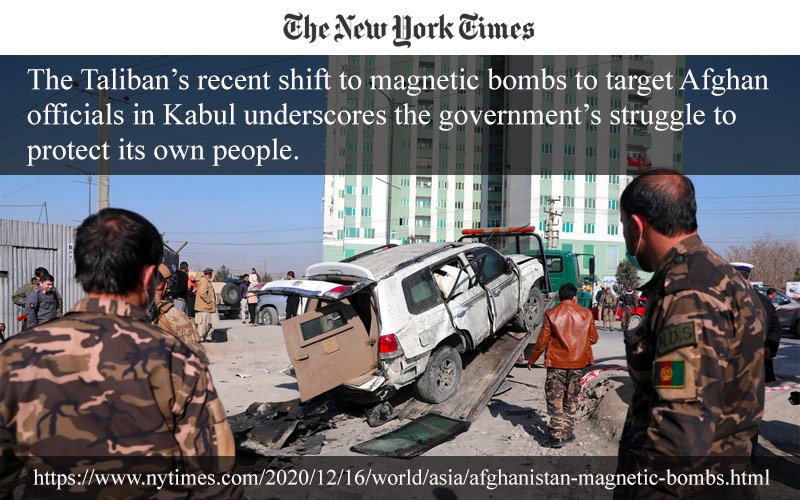 As noted in the headline below, the same tactics are being used in Jammu and Kashmir. This area north of India has been the subject of a long-standing territorial dispute between India, Pakistan, and China. The area has experienced armed insurgency, and has also been the focus of activity for various militant Islamic groups. 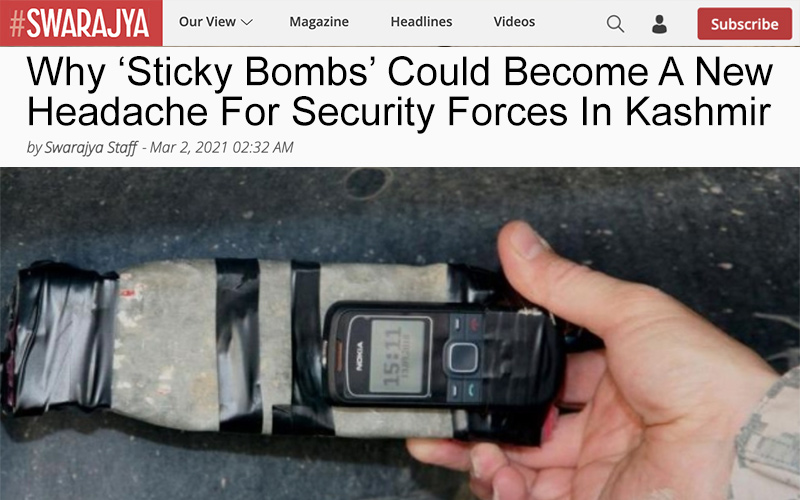 Magnetic IEDs are not new. They’ve been used in various conflict zones for years. The numerous recent incidents in which they’ve been used, however, point to a tactical trend worth noting. The materials necessary to make these devices are not as easy to obtain as more common weapons. Likewise, the skills necessary to assemble and successfully deploy a Magnetic IED speak to at least some degree of specialized training. Finally, the fact that the tactics are being used simultaneously in different areas has led some to wonder about connections, possibly with regional state actors.

One of the first steps of reducing the probability that an attack will impact you or someone you advise involves being aware of the various tactics commonly used in a given area of operation. Tactics involving targeted attacks have a way of developing, trending, and fading away. It’s difficult to know how long the current trend of using Magnetic IEDs will continue in the areas mentioned, yet while it does continue it’s helpful to think through a few mitigation measures.

An important technique to mitigate the probability of being involved in a Magnetic IED attack is to control access to the vehicle you operate when it’s not in use. We shared some thoughts on this in an article we posted on 27 January 2021. This was titled, “Disabling Vehicles.” We noted that your vehicle should be garaged when not in use. If this is not possible, a proximity motion sensor can be used to alert you that someone is approaching your vehicle. There are many such alarms available at reasonable prices. We offered an initial review of one in a 22 April 2020 article titled, “Covert Hardening.”

Denying would-be attackers access to your parked vehicle makes it much more difficult for them to attach a Magnetic IED to it. They are thus forced to do so when your vehicle is in operation, and when you or others are in it. This highlights the need for two important mitigation measures.

First, it’s almost always the case that any targeted attack, no matter which tactic is used, will involve days, weeks, or more of surveillance. We cover Surveillance Detection in topic 02.03.04 of the Panoplia.org online Soft Skills and Tactics (SST) course. Surveillance detection is one of the most important skills necessary for individuals to operate in challenging environments. Many post-incident investigations in which victims survived include them saying something like, “We knew we were being followed for several days before the attack took place, we even joked about it, but we had no idea it meant that we were a target.”

I can’t tell you how many times I’ve heard a variation of this line. The fact is, confirmed surveillance means something. Those with a background in surveilling criminals or militants can tell you that it’s not an easy thing to do effectively. It takes a high level of training and a skilled team to surveil someone without them knowing that they’re being observed. Generally, those chosen by militants or criminals to conduct surveillance on a would-be target don’t have advanced training in the skill. This being the case, they’re easy to spot for the individual who has even a low degree of awareness.

This brings us to the next mitigation technique. Situational Awareness (SA). This is covered in topic 02.01.03 of the SST course. Your SA needs to be turned up whenever you leave your place of residence or your base of operations. One should operate in at least low-Yellow whenever he or she is in public. As shown in the image below, Yellow stands for “Relaxed Alert.” 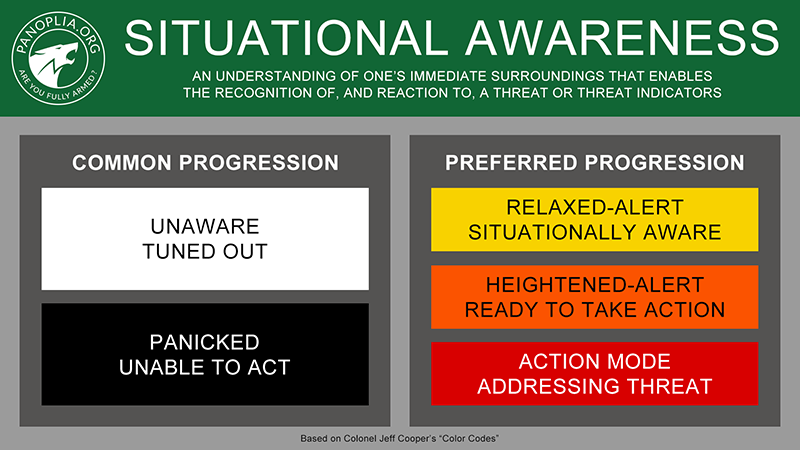 Critical to practice in any setting, one needs to be highly skilled in the art of situational awareness in order to effectively operate in a non-permissive or otherwise challenging area of operations. In the case of mitigating the probability of a Magnetic IED attack where it represents a common tactic, a special emphasis on being situationally-aware while in a vehicle is necessary.

Understanding how Magnetic IED attacks are carried out is an important factor. As noted above, this often involves two individuals on a motorcycle. They approach the target vehicle, place the IED on a metal surface, and ride away. Knowing this, one needs to be aware of any vehicle that gets close enough to deploy a Magnetic IED, especially motorcycles with a rider and passenger.

In the SST course topic 03.03.01 (Vehicle Assaults) we cover where vehicle occupants should be seated and the angles of awareness for which they are responsible when operating in challenging locations. This topic also covers how to react if a threat is detected. We suggest that you review this if it’s not already very familiar to you.

As suggested above, tactics involving targeted attacks have a way of developing, trending, and fading away. Knowing the methods used by would-be attackers in your area of operation, no matter where that may be, is an important part of the ability to achieve your objectives while avoiding unnecessary confrontation.

Feel free to share in the Comment section below any other mitigation techniques you may think of for areas in which Magnetic IEDs are a trending tactic. We value the opportunity to learn from your experience.