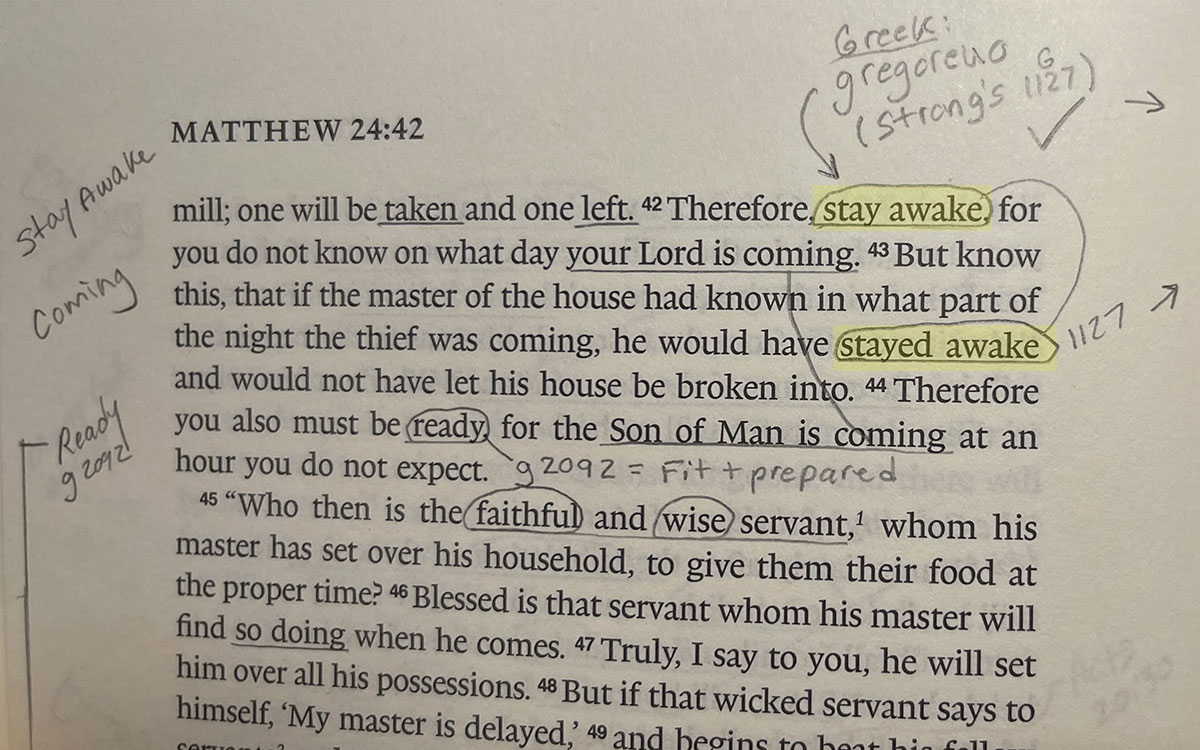 Spiritual Awareness – Are You Awake?

There’s a good deal of overlap between the physical world in which security specialists operate and the spiritual realm. One example concerns the similarities between Situational Awareness (SA) and Spiritual Awareness (SPA).

Situational Awareness is foundational to those who serve in high-threat environments. In fact, it’s foundational to the security of anyone, anywhere. The chart below is from topic 02.01.03 of the Panoplia.org Soft Skills and Tactics (SST) course. 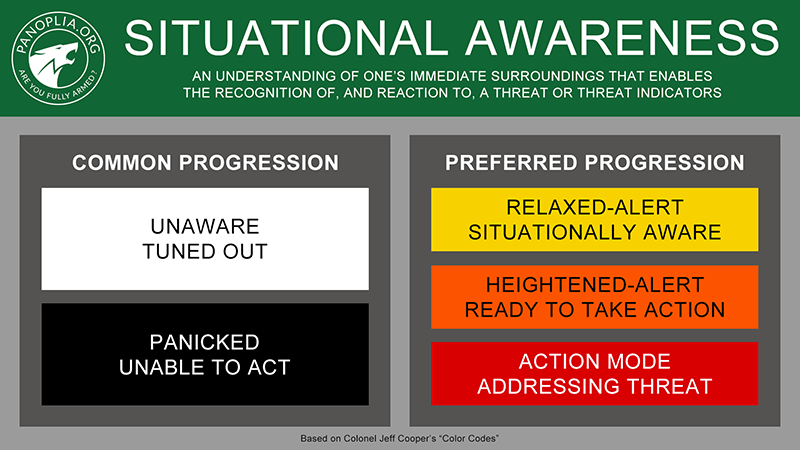 The left side of the chart is labeled “Common Progression.” This outlines what happens to individuals who are not situationally aware when an attack or other security incident takes place. It’s very common for people to walk around in public places with a very low degree of situational awareness. Look around the next time you’re walking down a busy street. It’s a good bet that you’ll see most people looking intently at their smart phones rather than at what’s happening around them. We call this being, “tuned out.” This is represented in the chart by the color white.

The normal progression for an individual who operates in condition white while in public is to move directly to condition black if something unexpected, such as an attack, takes place. They go directly from being tuned out to panicking. We’ve seen this time and again in training and in the real world. When they enter condition black, it’s not unusual for people to freeze and be unable to move or get themselves out of trouble. They’re simply stunned and frozen.

The “Preferred Progression” is one of the most basic and most important parts of any security training. Teaching people how to be situationally aware in a relaxed way while in public is the basis. Being aware, they can then move to condition orange or condition red as necessary, and quickly change levels as the situation and threat level rises or dissipates.

When heading out from a secure location to enter a high-threat area, security professionals will often remind one another to, “Get your SA on.” The same might be said when a member of a team seems to be tuning out. For more information about situational awareness and how it fits with other foundational security concepts and principles, please refer to the SST course.

So how does this relate to life for the Christ follower? In the same way that situational awareness is foundational to one’s physical security, spiritual awareness is essential for the individual who has chosen to trust Jesus and to serve him in this world. The previous Saturday articles posted on Panoplia.org were a three-part series entitled, “The Arena.” In this, we noted that those who are not trusting Christ for salvation are under the control of Satan and those who serve him.

As Christ followers seek to live an authentic biblical lifestyle within this domain of darkness, they draw the attention of powerful spiritual enemies. To operate in this “Arena” without spiritual awareness, or to be spiritually “tuned out,” is to either be ineffective in our service to the Lord, or to be open to the work of those who are highly motivated to deceive, distract, or to destroy Christ followers. Please see the last article of the Arena series for more information on this topic.

Once a Christ follower understands what’s at stake in the arena, and makes the choice to serve Jesus within it, the need for spiritual awareness becomes increasingly more evident. Portions of Scripture such as Ephesians 6:10-18 begin to make more sense than they ever have before. In fact, the entire Bible begins to make a great deal more sense as the need for increased spiritual awareness becomes clear.

For example, consider the words of Jesus after he explained to his Disciples about what would precede his return, and when it would occur. In Matthew 24:36-44 (ESV) Jesus says:

Therefore, stay awake, for you do not know on what day your Lord is coming. But know this, that if the master of the house had known in what part of the night the thief was coming, he would have stayed awake and would not have let his house be broken into. Therefore you also must be ready, for the Son of Man is coming at an hour you do not expect.

This passage speaks to the need for spiritual awareness in several places. First, notice how Jesus describes life during the times of Noah, and how times will be before his return. In both cases, people were preoccupied with life in general. Jesus notes that they were “unaware” until it’s too late. This refers to what we describe as life in the “Arena.”

In the second paragraph, Jesus teaches those who want to serve him how to be spiritually aware. He mentions “staying awake” twice in the space of two sentences. In both cases, the two words translated into English as “stay awake” are one word in Greek. It’s the word grēgoreuō. The Strong’s number for this New Testament word is G1127. Search the Internet with the phrase “Strong’s G1127 ESV” and you’ll find some great resources. Click on the link from blueletterbible.org. This will allow you to research the meaning of this Greek word for yourself. It will also list the 22 times this Greek word is used in the New Testament. This will allow you to see the word in various contexts.

While you’re at it, search the Internet for the phrase “Strong’s G2092 ESV.” This will show the entry for the Greek word that’s translated as “ready” in the last sentence of the passage quoted above. Words like this speak directly to the need for the Christ follower to be spiritually aware. Researching their nuanced meanings in the original language helps us to apply them to our lives today.

As an aside, any word in the New Testament can be studied in the same way as noted above. To do so, simply write down the passage in which a word you would like to study occurs. Then search the Internet for the phrase “Online Greek Interlinear Bible.” Click on the link from Scripture 4 All. This will allow you to search any passage and to find the Strong’s word that’s in the original. You can then look up the Strong’s word as described above.

The deeper you dive into the word of God, the more you will discover the need for spiritual awareness. Just as situational awareness is foundational for specialized security personnel who operate in high-risk environments of the physical world, all who desire to serve Jesus in the spiritual arena need to be spiritually aware. So, the next time you get too preoccupied with the concerns of the world around you, quietly remind yourself to, “Get your SPA on.”

May the Lord help us all to be more spiritually aware than we’ve ever been as his return draws closer, and as the domain of darkness grows ever darker. Amen!