Two weeks ago we posted an article that addressed the need for communications redundancy. We noted that for most domestic (CONUS) and international (OCONUS) travel we make use of a three-tier Comms Redundancy Plan. This includes an iPhone (Primary), a MacBook Pro (Secondary), and the Garmin InReach (Tertiary). We also suggested that we would add the Iridium Extreme 9575 satellite phone as a fourth tier if headed to a conflict zone or for travel while responding to a crisis incident.

Last week we noted that while traveling for emergency response or within conflict zones, it’s not unusual to be “off-grid” for long periods of time. In other words, to have limited access to a reliable source of electricity to keep one’s communications devices charged, and thus operational.

We also noted that having access to the devices shown in the image above allow for emergency communications from almost any spot on earth. It’s crucial to recall, however, that they turn into dead weight if one cannot keep them at least partially charged. Even at a 10% charge, several of these devices can be used to communicate for hours. So how do we keep these charged in the most extreme locations? The answer depends on the Loadout Level in question. Last week’s article focused on Loadout Level 01 (LL-01) Concealed on Body, Loadout Level 02 (LL-02) Go Bag essentials, and on Loadout Level 3A (LL-3A) Portable Survival. We explained that for LL-01 we don’t usually carry a charging option since our LL-02 would be so close. We usually carry a 10,000 mAh portable charger as part of our LL-02. Finally, we noted that for LL-3A we carry several portable charges along with a small solar charging device to keep them up and running.

Before moving on the how we keep communication devices charged for LL-3B and LL-04, it’s worth mentioning how we see an individual progressing from one Loadout Level to the next. As you carefully review the Loadout Levels document above, notice the progression listed next to the word CRISIS under the Loadout Level 3A column. This is vital to the Loadout Levels concept as a whole. In times of crisis your best chance of survival is to stay within a well-prepared and supplied residence or base of operations. The progression is shown in the chart below. These documents are somewhat difficult to read in this size, yet both are available as large format PDF downloads as part of the SST course.

LOADOUT LEVEL 3B (LL-3B) – Vehicle Survival
If you carefully review the Loadout Levels document shown above, you’ll notice that we recommend keeping one’s portable survival bag (LL-3A) under 30 pounds. This can be supplemented by an LL-3B bag that can add an additional 60 pounds of gear and supplies if and when a vehicle is available. This allows for more options when considering how one can keep communication devices operational.

When it’s is up and running, the vehicle itself can serve as an excellent source of electricity to charge communication devices. It’s important for this reason to ensure that your devices can be recharged using 12 Volts DC, or to have an inverter that will allow devices that require 120 Volts AC to be charged. Since fuel may be limited, however, it’s always good to have a backup that will allow you to keep devices charged without the vehicle as a power source.

The amount of charging power you need will depend on the degree to which communications are essential, and the amount of communication you anticipate. Since I serve as a Global Security Advisor and communicate a great deal with leaders and teams serving internationally, I have very high requirements. For this reason I’ve chosen to include a Goal Zero Portable Power Station in my LL-3B. The image above shows the contents of my current LL-3B bag (minus the bag itself). The Goal Zero Yeti 400 Lithium unit is shown on the far-right. As shown in the image below, the unit has charging ports ranging from 12 Volts DC, to 120 Volts AC, and USB options. It weighs 16.3 pounds. 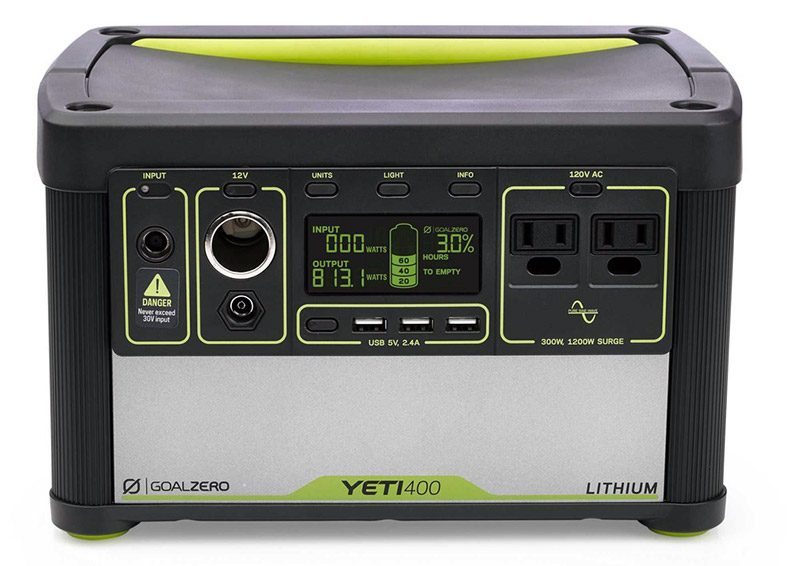 I’ve had this unit for 18 months now, and it’s served me well. In an emergency or grid-down situation in which I use my MacBook Pro sparingly, and my iPhone, InReach, or satellite phone for most communications, this can keep me up and running without being recharged for weeks. This model is now discontinued. Goal Zero now has lighter units that offer even more power.

When our Yeti 400 does need charging and a vehicle is not available, I have two options. Shown in the image of my LL-3B contents, you can see a small solar panel folded up and tucked between the orange medical bag and the box containing other items. This is a Goal Zero Nomad 20. It would take a very long time to fully recharge the Yeti 400 with the Nomad 20, yet it can be used for this purpose. 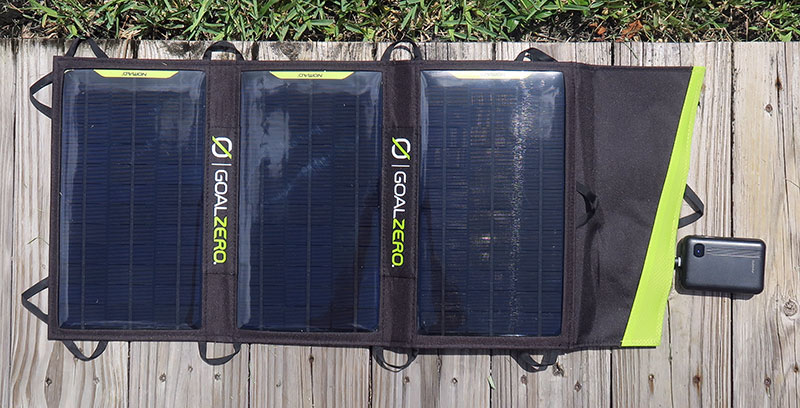 When plugged directly into an iPhone 7 Plus, the Nomad 20 added 17% in just 30 minutes. Either option will keep you communicating in an emergency situation.

If space allows, another option is to use a larger solar panel to recharge the Yeti 400 Lithium or a similar power station. We recently purchased and tested the Goal Zero Boulder 200 Solar Panel Briefcase. The image below shows it unfolded and set up in our yard. This expensive ($500) and heavy (42 pounds) unit is amazing. On a partly cloudy day, the Boulder 200 was able to add 20% to the Yeti 400 Lithium’s charge every hour. It’s rated to be able to completely charge the unit in about 3-4 hours with full sun. Again, that would provide weeks of communications for our needs. LOADOUT LEVEL 04 (LL-04) – Residence Survival
The great thing about your LL-04 setup is that it’s not limited by weight. During long-term power outages caused by hurricanes we’ve used generators powered by gas during the day, and the Yeti 400 Lithium at night for all our communication needs.

Incidentally, Goal Zero and a few other manufactures now have very high capacity portable power stations available. It’s my understanding that Goal Zero will be releasing a Yeti 6000X unit soon. This will likely cost about $5,000, yet should be able to run a fridge, freezer, and meet all your communication charging needs for long periods. Such units can be recharged using a linked series of portable solar panels like the Boulder 200 mentioned above. The advantage over a gasoline generator is that this would not include noise, and thus give away your location in a situation during which that would be problematic.

The bottom line is that there are times when keeping one’s communication devices charged and operational is very challenging. With this and last week’s posts we’ve highlighted a number of options for your consideration. Feel free to comment below if you have other options that have worked well for you.

Note: Panoplia.org has no affiliate relationships with manufacturers or retail suppliers. We simply share our views about gear and supplies that work well for us under hard use.