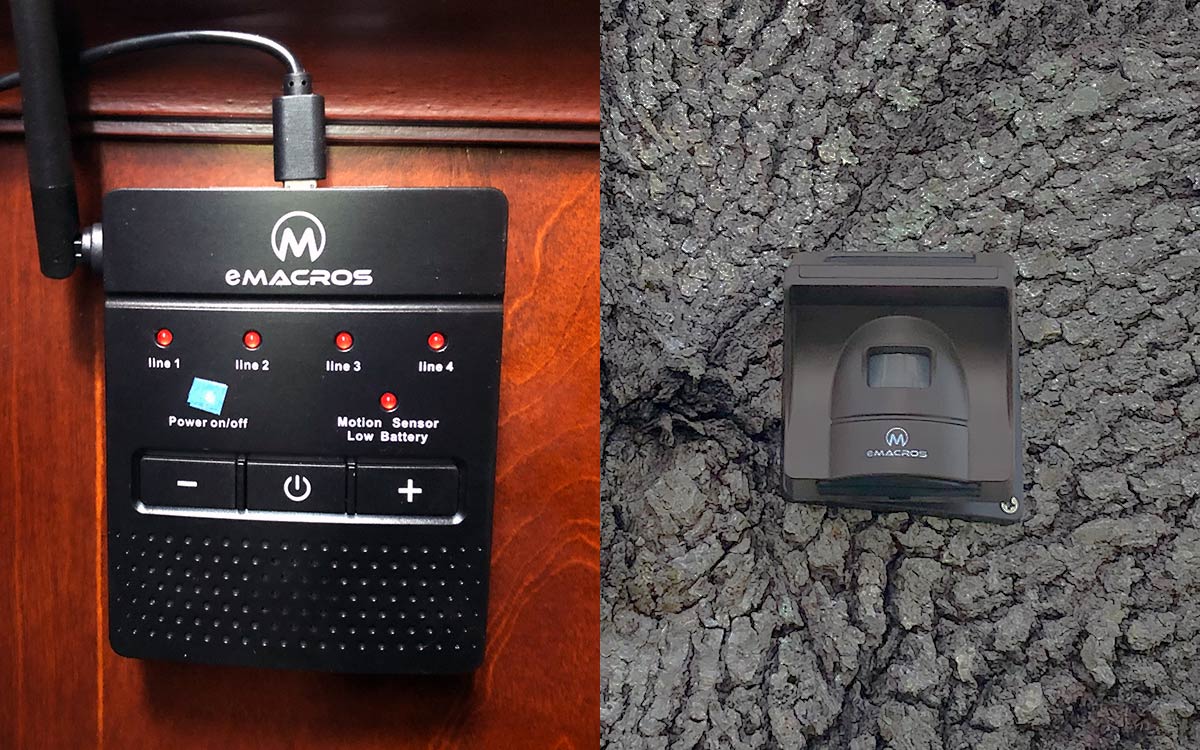 On 22 April 2020 we posted an article called “Covert Hardening.” You can review this by going to Panoplia.org and clicking on the “Latest Posts” link in the top navigation bar. Once there, enter the word “Covert” in the Keyword box and hit “Search.” You can then read the article by clicking on the image of barbed-wire on a second-floor porch that I took in Yemen that headlined the article.

As part of the larger concept of Covert Hardening, we mentioned in that article the value of setting up perimeter alarms. These alert one to the fact that someone or something is approaching his or her position. Depending on the circumstances, even a few seconds of early warning can provide the opportunity for one to be prepared for a possible confrontation. The farther out on one’s property the alarms are placed, the more advance warning once can receive.

In April 2020 we purchased and set up the perimeter alarm system shown in the following image. We mentioned in the article referenced above that we would let you know in a year or so how this system worked out. After thirteen months of operation, we offer our thoughts below. 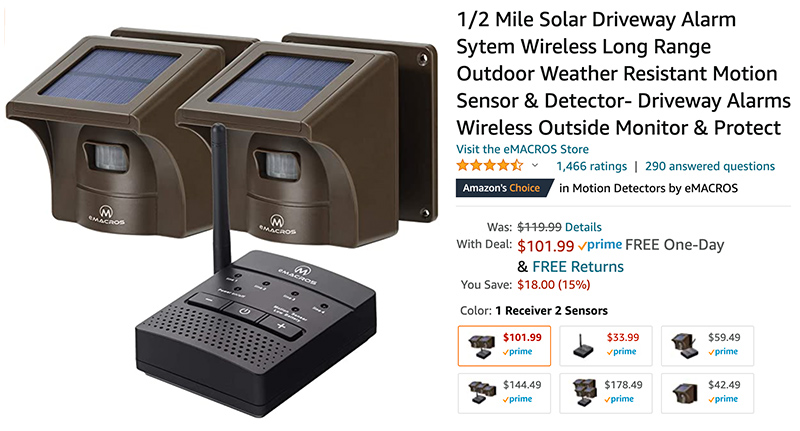 This system, now sold for $18.00 less than we paid for it a year ago, has been outstanding. The image at the top of this article shows the base station next to our bed, and the alarm unit we have on a tree in our front yard. This is about 80 feet away from the base station, and 30 feet away from and facing our front door. This has worked flawlessly. We know whenever someone approaches the front of our house day or night. For example, individuals who deliver Amazon packages don’t ring our doorbell, but the perimeter alarm lets us know when they approach the front porch. The system rings a second time when they walk past it back to their truck. It has a wide enough coverage angle to also ring if someone approaches our garage door.

The only issue we’ve had with this unit is that five or six times over the year a lizard or racoon climbed past it at night and set off the alarm, which is a short chime. The racoon actually used the unit as a step, and ended up pointing it to the ground. I placed a few large nails above it about six months ago, and it has not been moved since.

Our second unit is only about twelve feet away from the base station, separated from it by a concrete wall. This is shown in the image below. 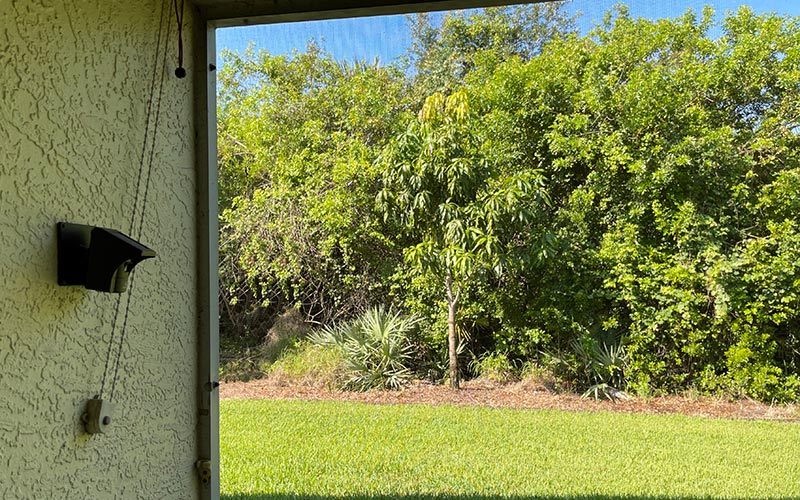 This lets us know if anyone approaches the porch from the front or side. A great feature is that the base station can receive signals from up to four alarm units. Each has a distinct short chime, and so one knows which unit has been tripped without looking at the base station. As a backup, a light above the unit number shines brightly on the base station when a particular alarm is tripped. The volume of the chime when tripped can be adjusted on the base unit. There are times when I press this all the way down so that there will be no chime. I do this when a number of people are visiting. When they leave, I simply turn the volume up again. I keep it at the second lowest setting.

You’ll notice that the unit attached to the wall inside our back porch does not have access to direct sunlight. The unit in the tree out front is also almost always in the shade. Despite this, we’ve never had any issue with either unit being powered. The built-in solar panel on the alarm units have kept them fully charged and operational since we placed them into position. Aside from adjusting the position of the front unit after the racoon used it as a step, we’ve not had to touch them after the initial set up and tweaking the coverage angles to the ideal position. We have them set so pets will not set them off, but people do.

Another positive aspect of this system is that it doesn’t depend on other services. It’s a self-contained wireless system. The alarm units communicate with the base station without the Internet or a WiFi connection. As noted above, the alarm units are solar-powered. The base station plugs into the wall, and four AA batteries provide backup in case the power goes out. We tested this backup feature, and it works very well. What this means is that even when the power is out and the Internet and/or WiFi are down, and thus our current security cameras are non-operational, this perimeter alarm system is still up and running.

The only negative aspect we could think of related to this system concerns the distance the company claims one can place an alarm unit from the base station. They claim one-half mile “in ideal situations.” They then say:

“Our system has been real-world tested in settings with trees, buildings, walls, and vehicles. It easily achieves a 1500FT wireless range in most conditions. It’s been tested through thick forestry, hail storms, gusty winds, heavy rains, scorching heat, and snow.”

One improvement to the system would be more chime options. The choices are limited and are a bit strange.

After a year of flawless service, we highly recommend this setup for anyone looking for a perimeter alarm system as long as the operational distances are kept in mind. For information on how these can fit within the overall Covert Hardening concept, please see the Panoplia.org Soft Skills and Tactics (SST) course topic number 03.01.05.