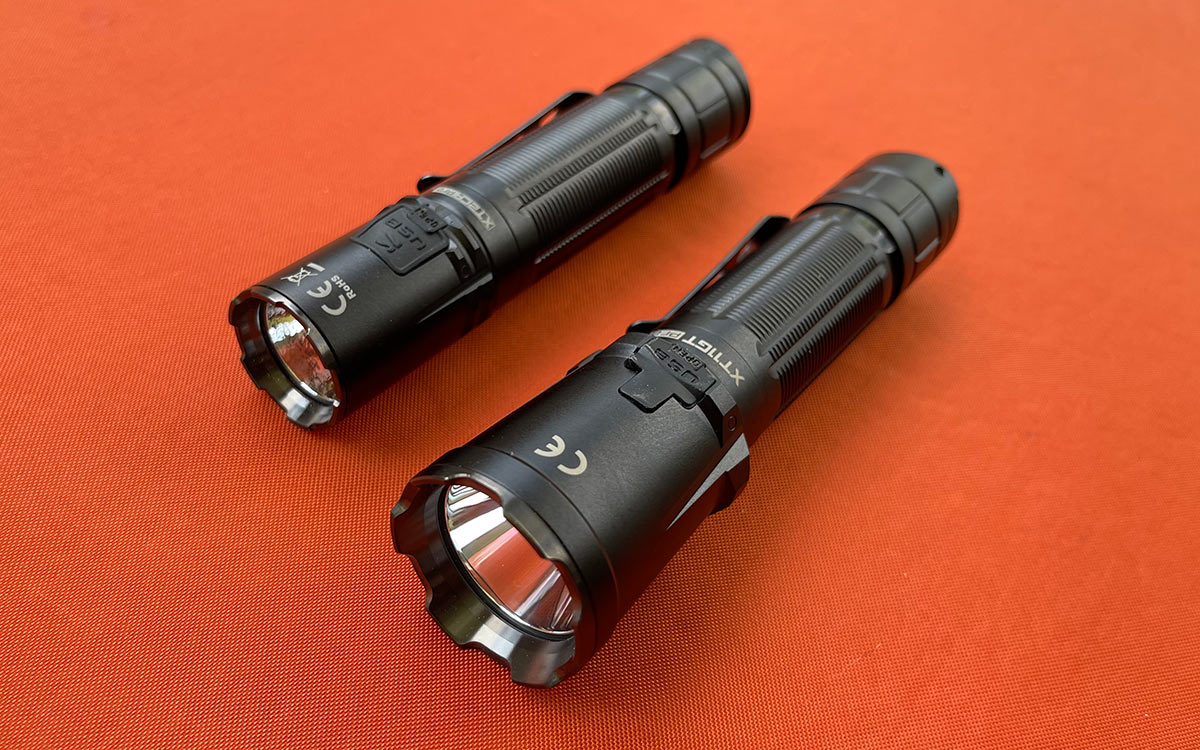 A well-made, dependable, tactical flashlight is one of the most important pieces of gear that you can carry. On a basic level, it provides light in the darkness. This may seem boring, yet if you’ve ever been in a sketchy area when the electricity goes out at night, you’ll know that being among the few who have access to a light makes a tremendous difference. This happens often in overseas locations. A good, high-lumen flashlight is also invaluable during a search scenario. 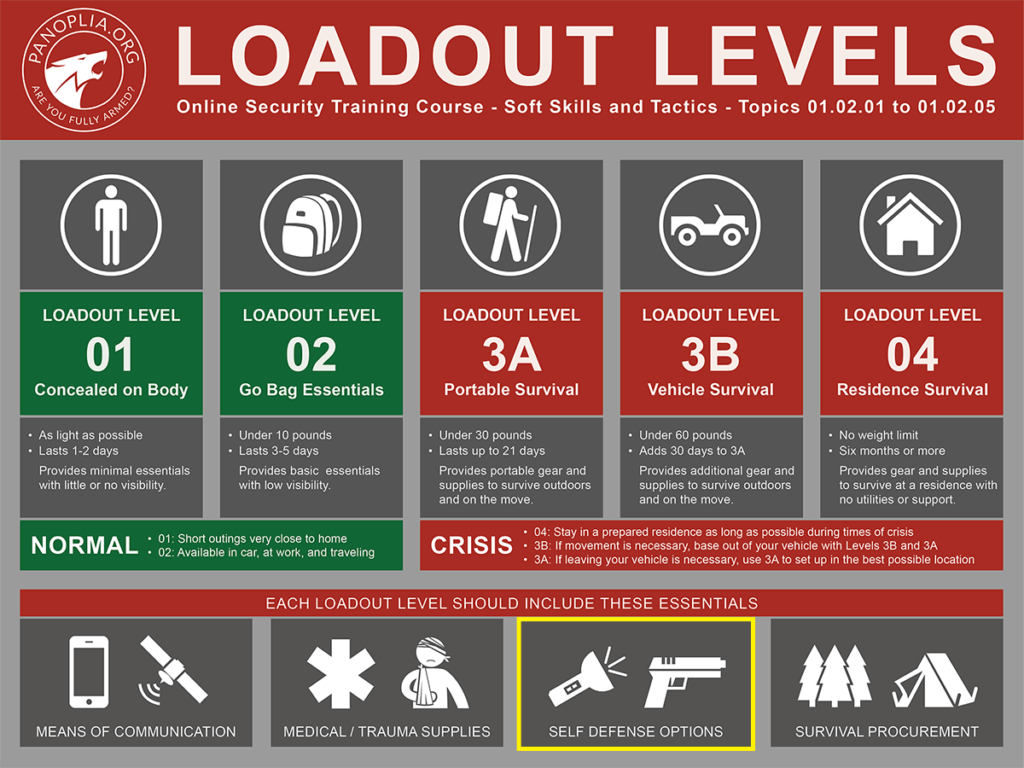 There’s a reason why a flashlight is pictured in the “Self Defense Options” area of the Loadout Levels essentials block as highlighted in the image above. This is due to the fact that a tactical flashlight can serve as a force multiplier in at least two ways. First, a high-lumen flashlight can serve to temporarily blind an attacker. If you’re familiar with the principles of the OODA Loop as described in the Panoplia.org Soft Skills and Tactics (SST) course topic 02.01.04, you’ll know that re-setting the loop of an attacker gives you a significant advantage in a confrontation.

The second way that a tactical flashlight can serve as a force multiplier is as a striking weapon. Slamming the crenelated bezel end of an aluminum flashlight into an assailant’s forehead would likely produce a copious amount of blood flow, and may give one the split-second needed to gain a tactical advantage or to escape. Granted, this would absolutely be a measure of last resort, yet we’d rather have this option than not have it.

Having made the case that a tactical flashlight is an almost essential piece of gear to carry, the question becomes which make and model will work best for your situation? We’ve been carrying and testing tactical flashlights for years. We’ve focused on flashlights from three manufacturers. The ones we’ve come to like best are made by a company called Klarus.

Let us state right up front that Klarus flashlights are made in China. We try hard to purchase products made in the United States. If this is not possible, we look for gear made in countries that have similar values to the USA. For flashlights, we’ve not been able to find anything from preferred sources that come close to the features available on a Klarus tactical flashlight. More on that later.

If you visit klaruslight.com, click on the “Flashlights” icon located on the left side of the red navigation bar at mid-page. Then under the “Product Series” drop-down box on the right, choose “XT Series.” The resulting page will show a dozen or so options for flashlights with crenelated bezels. I’ve tested about a dozen of these models over the years. I’ve only had one issue. This concerned a recharging port, and Klarus offered to replace the flashlight free.

The two models we currently use most for carrying are the XT11GT Pro and the XT2CR Pro. These are pictured below. 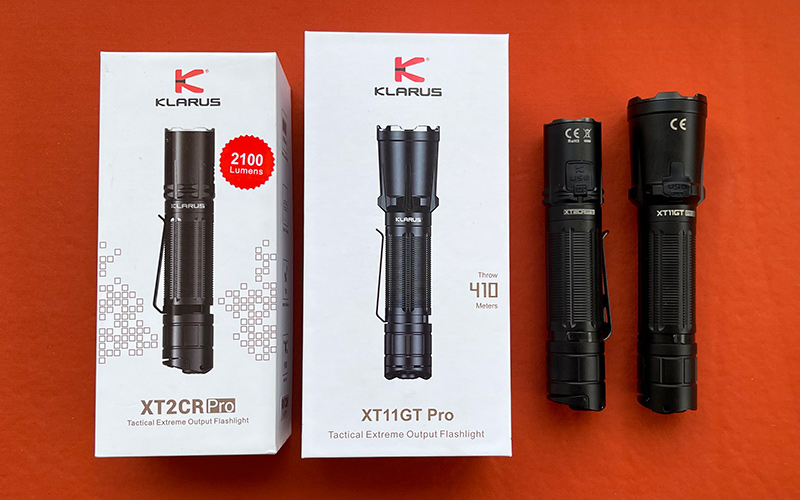 Both of these models have the features we look for in a tactical flashlight. These include:

1. Aluminum construction
2. Dependability
3. Durability
4. A high lumen rating
5. A tail cap with both an on-off switch and a dedicated strobe toggle
6. The ability to recharge the flashlight
7. Water resistance
8. A removable crenelated bezel
9. The absence of a side switch

The first four features need no explanation. We like a tactical flashlight with a dedicated strobe toggle on the tail cap for a number of reasons. The primary reason is that strobing thousands of lumens into one’s eyes is disorienting in the extreme even in daylight. Having quick access to this option is helpful.

Klarus has worked to steadily improve the toggle switch as shown below.

If the flashlight is already on with continuous illumination, pressing the toggle switch will adjust the light output to one of four or so lumen levels. Once the unit is turned off, it will start on the highest lumen level when turned on again. We find this user interface for the tactical mode to be intuitive and easy to master. Please see the Klarus website for other mode options.

The ability to recharge a tactical flashlight is key. Replacing the batteries after every few uses on a high-lumen flashlight gets old very quickly. To charge either of these models, simply push aside the rubber cap and plug in a USB C charging cable as shown below. 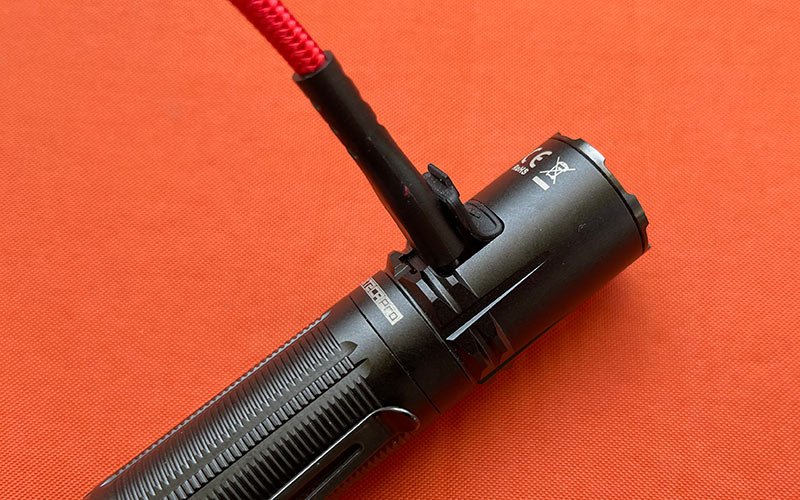 Both models are rated at the IPX8 level of water resistance. We’ve never tested this by submersing the units into more than a meter of water for an extended period of time, yet we can say that they’ve never failed us under normal use.

We prefer a removable crenelated bezel for one simple reason, the TSA. If you travel internationally very often, you’ll know that Transportation Security Administration (TSA) agents and their foreign counterparts often use their own judgement when evaluating whether something is a harmless piece of gear or a weapon. Having the ability to remove the crenelated bezel solves this issue for us. We simply remove the bezel and place it in a backpack before security screening, and replace it when we choose.

We prefer to not have a side on-off switch on our flashlights. This is because they can be easily activated by being bumped while carried.

When it comes to which of these two Klarus models we prefer, the XT11GT Pro has a larger bezel diameter, is about .25 inches longer, and weights 1.2 ounces more than the XT2CR Pro. For these reasons, we prefer the XT2CR Pro for on-body carry, and the XT11GT for Go-bag carry as shown below. Please see the Klarus website for more specifications.

The item next to the Klarus in the image below is an aluminum Fisher Space pen. We may review this at some point as yet another force multiplier. 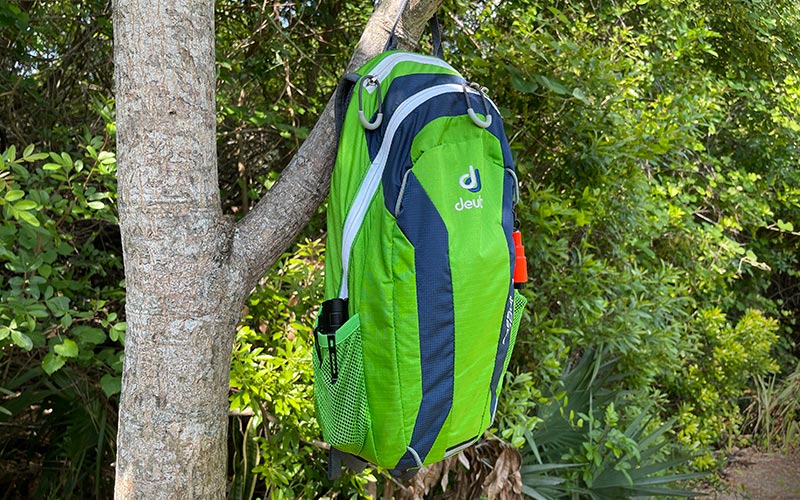 We noted above that we’ve not been able to find anything that comes close to the features available on a Klarus tactical flashlight from a U.S. or other preferred source. To demonstrate this, simply compare the features and specifications of the Klarus XT11GT Pro and the Surefire Fury DFT. Aside from the Klarus having a higher rated lumen output, a strobe option, a higher waterproof rating, and a removable crenelated bezel, the Klarus is available at Battery Junction for $94.95 while the Surefire sells for $199.00 from the same retailer. Incidentally, we prefer Battery Junction to other retailers for our flashlights.

As is true for all other gear, the choice of which tactical flashlight to use comes down to personal preference and experience. If you’ve carried a Surefire for years and it’s never let you down, we recommend that you keep doing so. If you’d like something to compare your current carry flashlight to, however, based on our experience we recommend that you consider evaluating a Klarus model.

Finally, if you know of a tactical flashlight made in the United States that has the feature list shown above, please let us know. Thanks!

UPDATE 14 April 2022
A member of Panoplia.org noted that when removing the crenelated bezel of his XT11GT Pro the glass lens would not stay in place. We’ve never had this issue with any Klarus flashlight, yet we very much appreciate this feedback. Klarus does not mention a removable bezel as a feature, and so we wanted to make members aware of this possible issue.