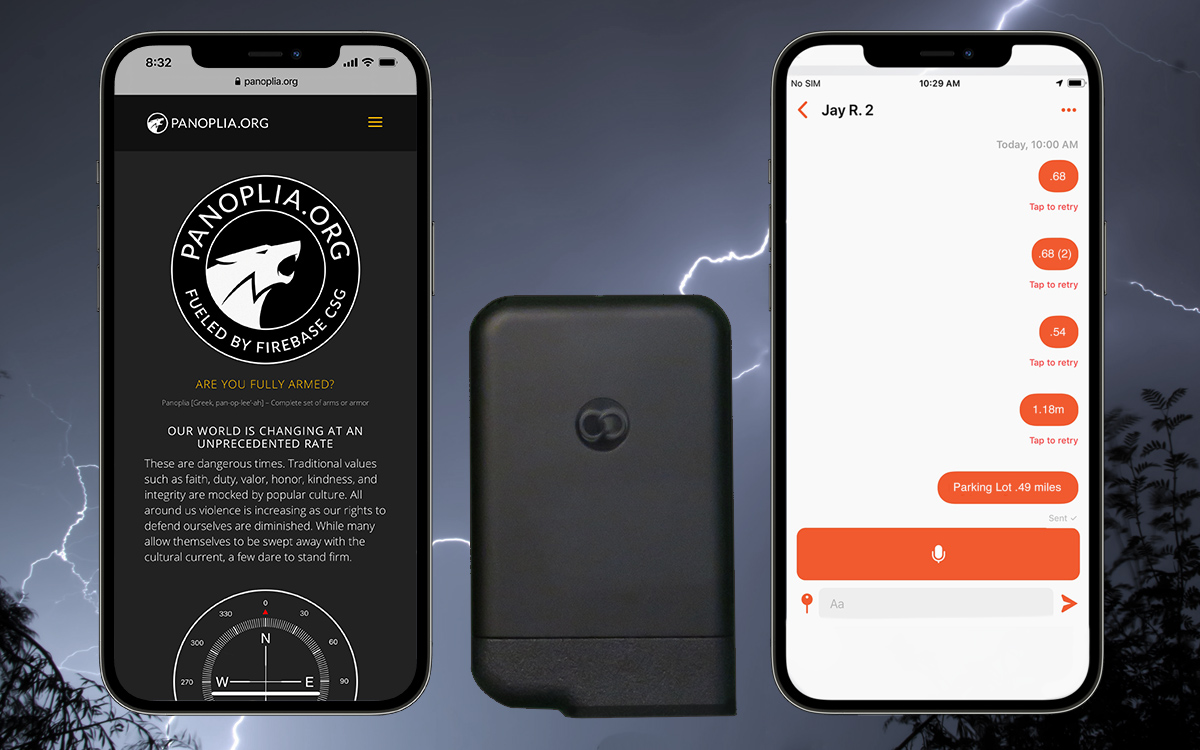 As Global Security Advisor for teams serving in over 100 countries, I’ve learned first-hand how important it is to have communication redundancy. We’ve mentioned in numerous posts that having a three-tier Comms system should be considered the minimum. A three-tier (Primary, Secondary, and Tertiary) system might include a mobile phone, a second digital device with an Internet connection, and a satellite phone or texting unit.

A four-tier Comms system is even better. This is referred to by the PACE acronym: Primary, Alternate, Contingency, and Emergency. The first three levels might be the same as the items listed above. The fourth is the tricky part. Secure communication over distance is difficult once an individual has lost mobile service, an Internet connection, and satellite service. For this reason, we spend a good deal of time testing new options for Level Four Comms.

We know a number of individuals who carry the GoTenna Mesh product as a Level Four option. We’ve not tested this ourselves because if you dig very deep within the GoTenna website (see here) the company notes:

In other words, unless connected to a series of other GoTenna units in a Mesh network, the range is very limited. This means that the GoTenna Mesh option simply would not work for most of our teams. They do offer a GoTenna Pro X model that likely has greater range, yet this is a VHF unit and requires an FCC license to operate in the United States. Since this unit does not support voice, we prefer two-way VHF radios if one is going to go to the trouble of getting a license or trying to get a VHF unit into another country.

This brings us to the Beartooth product. Whereas the GoTenna Mesh lists a range of 0.5 miles or much less in non-line-of-sight situations, the Beartooth website claims four miles (6.4 kilometers) without line of sight. This can be seen on the specifications list below found on the Beartooth website. The boxed highlight around the NLOS range is ours.

Achieving four miles without line of sight would be outstanding. This would serve as an excellent Level Four communications option, albeit for a limited distance. One could not, of course, communicate to the outside world using such a solution, yet team members in the same general area could at least stay in contact with one another.

With this in mind we ordered four Beartooth units for testing. This cost a total of $485.00. The order was placed in February 2021. Due to the supply issues so many other industries are dealing with at the moment, we did not receive the units until late June 2021. We started our testing soon thereafter.

The testing was conducted in Central Florida. The sky was overcast, and the temperature was about 83 degrees Fahrenheit. Setting up the units involves downloading an App. We used an iPhone and an iPad for the tests. Neither had a SIM car installed, and both had WiFi turned off.

The App is pretty straight forward. It takes just a few minutes to learn how to use it. We tested the two digital devices right next to one another, and had no issues. Both sent and received text messages using only the Beartooth units as a means of communication. We then tried from two rooms in the same building. Again, no issues. Moving outside the building had the same results – the units communicated without a problem.

We then placed the stationary unit on a tripod five feet high, and outside. We did so hoping to get the best results possible. We took the other unit and the iPhone attached to it by Bluetooth into a vehicle. We drove a hundred yards away or so, and sent a message. It was sent and received. The reply also was sent and received. We were impressed with this not because of the range, 100 yards, but because the unit worked from inside the vehicle. Cars and trucks often act like a Faraday Cage, or shield, that blocks electronic signals. This is why radio antennas are either mounted outside a vehicle or embedded inside a vehicle’s glass.

We then drove to a distance of .25 miles. No problem at all. This was followed by an attempt at .36 miles. Again, the iPhone and iPad communicated with one another using only the Beartooth units to do so. We then went to a spot .48 miles away. The unit failed to send or receive a signal from within the vehicle, yet once we stepped outside into the open the units did communicate. So far, so good.

We then tried a location that created a distance of .68 miles between the units. We could not get either unit to send or receive a message. Even getting out of the vehicle and holding the Beartooth and iPhone as high as we could, no messages were sent or received from either unit. Instead, as shown below, the App returned a message that said, “Tap to retry.” No amount of tapping or attempts to send a new messages solved the issue.

We tried various other distances greater than one-half (0.5) miles from a variety of directions. Nothing worked. This included an almost line-of-sight distance of 1.18 miles. Nothing would send or receive. We then transitioned to a location .49 miles away from the stationary unit, yet from a direction different than the previous .48 location that was successful. We were able to send and receive messages from this .49 mile location.

The bottom line is that we could not get the Beartooth to communicate in a non-line-of-sight setting at more than a distance of .49, or just under one-half mile. This despite the fact that the specifications shown above claim that texts can be sent without line of sight up to four miles away.

It should be noted for comparison purposes that we’ve used Motorola DTR410 two-way radios for over five years. We used these on a very large property during on-site security training. We’ve tested these for range, and found that they have the exact same effective range as the Beartooth. Neither the Motorola DTR410 nor its successor the DTR600 require an FCC license since they operate on a 900 MHz frequency.

With these results in mind, the Beartooth units we received in June 2021 were not acceptable for our needs. Others may achieve better results in other conditions, yet we do not plan to recommend the Beartooth units to our teams at this point. As long as the range is the same, we prefer two-way radios since they do not require a Bluetooth connection to a second digital device.

We appreciate Beartooth agreeing to a return of the tested units, and wish them all the best as they continue to develop their technology.