There’s a great deal of anger on the streets of America at the moment. Individuals angered by injustice are gathering together and raising their voices in an effort to bring attention to serious issues.

The problem is that those seeking to bring awareness to injustice are being manipulated. Peaceful protests are being overtaken by rioting, looting, killing, and destruction. This plays into the hands of those who take advantage of the anger in order to further their own causes and ideologies.

Protesters angered by injustice are being led astray. In many cases the leaders and celebrities who most loudly applaud the calls for change are the very ones who’ve for decades been in the position to bring about the changes sought. Rather than doing so, they’ve enriched themselves on funds intended to make a difference, and have fed off the notoriety they’ve garnered by yelling the loudest while doing the least. Many of these individuals would have no work at all if social healing were to take place. Their very careers are dependent on continued division and animosity.

What these false prophets of change all have in common is an appeal to outrage. They make selective use of extreme examples to suggest that these represent the norm. They ignore statistics, and respond to calls to examine actual data by attacking the motives of those who wish to engage in calm dialogue to foster change.

What we’re witnessing is not new. Manipulation started in the Garden of Eden. With incredible skill, Satan made that which was evil look very good. Thinking they would attain what they truly desired, Adam and Eve fell for the deception and paid the price. The decision they made has served as a model for all their descendants, including you and me. Another word for model is the term “pattern.” The Bible speaks of the result of this original sin as becoming the “Pattern of this World.”

Romans Chapter 12 stands as one of the most remarkable portions of scripture. I often wonder what life would be like if only small fragments of the Bible survived from antiquity. If this were the case, aside from the four Gospels I hope that Romans 12 would have survived. It’s that life-changing if known and followed. Romans 12:1-2 in the NIV reads as follows:

Therefore, I urge you, brothers and sisters, in view of God’s mercy, to offer your bodies as a living sacrifice, holy and pleasing to God – this is your true and proper worship. Do not conform to the pattern of this world, but be transformed by the renewing of your mind. Then you will be able to test and approve what God’s will is— his good, pleasing and perfect will.

The remaining nineteen verses of Romans 12 are just as powerful. So how do we apply these two verses to what’s happening today? In one sentence within these verses we are offered a contrast. We can either conform to the patterns of this world, or we can be transformed by the renewing of our minds. It’s clear from the context of this verse and in many other portions of Scripture that the way to renew one’s mind is through being transformed as we read the Bible and apply what we learn to our daily lives. Those who are transformed in this way will see God’s will more clearly than those who are deceived by blindly following the patterns of this world based on sin and deception.

The manipulation that’s taking place with regard to the current unrest in the United States serves as an example. African Americans and other minority groups are being told that the way to overcome tendencies toward racism is through violence, anger, hatred, and reverse racism. It needs to be understood that the term racism refers to the treatment of individuals or groups based on the color of their skin. Accusing an individual who happens to be white of being guilty of white privilege is just as racist as suggesting that African Americans should be treated differently than anyone else by law enforcement officers. Following the deceptive pattern of this world leads to anger and division.

So what does it look like when we view the world and how to treat others within it from a biblical perspective? Let’s look at 1 Corinthians 13:4-7 as an example. In the NIV version, it reads:

Love is patient, love is kind. It does not envy, it does not boast, it is not proud. It does not dishonor others, it is not self-seeking, it is not easily angered, it keeps no record of wrongs. Love does not delight in evil but rejoices with the truth. It always protects, always trusts, always hopes, always perseveres.

The meanings of the words in these verses are very deep in the original language. I did my best in the chart below to capture them based on my personal study of various resources. Note the mention that love always protects. People of integrity who serve in the military or law enforcement are, in fact, fulfilling a very high calling. 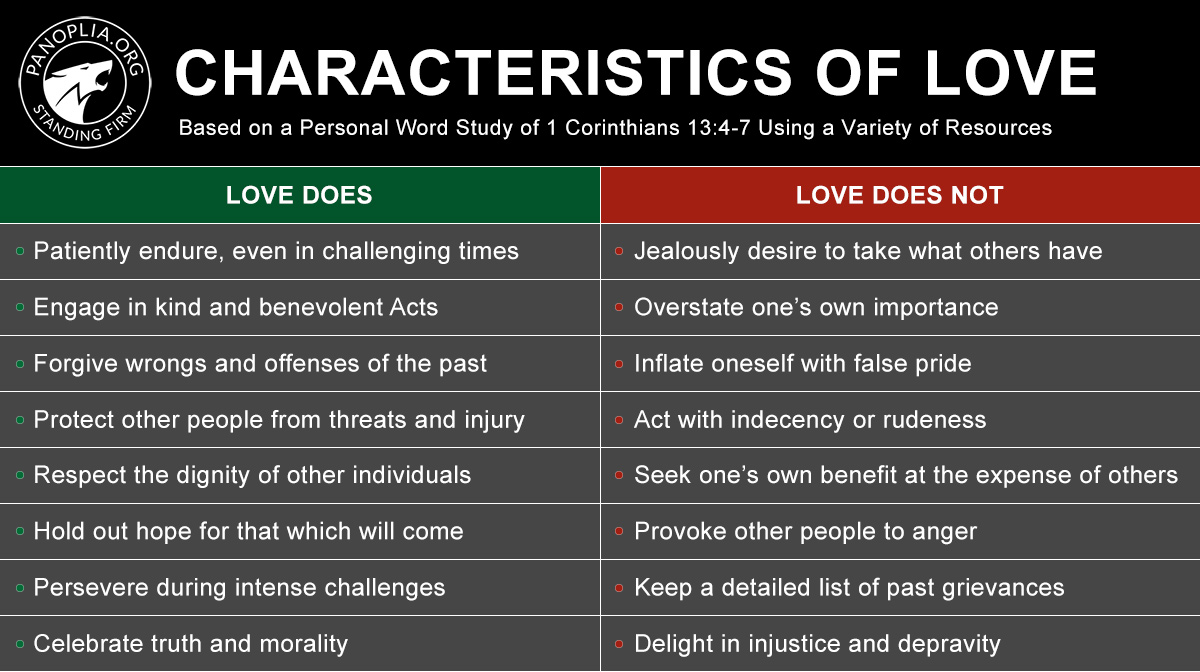 What would life in America and elsewhere look like if rather than embracing anger, hatred, and division, individuals were transformed by living out even these few verses of biblical truth? I suggest that it would be transformative not only for individual relationships, but for society as a whole.

Why is this so hard? It’s very difficult because everything within our sin nature calls us away from this. Our nature and the loudest voices among us call us to selfishness, suspicion of others, and division. In short, by nature we follow the pattern of this world and are encouraged to do so by many leaders and celebrities. The result is hatred and division.

Do you want to change the United States of America? You can begin doing so by loving others based on 1 Corinthians 13:4-7, and by encouraging others to do the same.

Are you a law enforcement officer approaching an African American suspected of a crime? Choose to treat that individual as you would want another officer to treat your son or daughter if he or she were in the same circumstances. Treat them based on their individual behavior. Use patient forbearance as much as the situation will allow. Treat genuine threatening behavior the same no matter the color of the suspect’s skin. If aggressive tactics are necessary based on the situation, use them without malice.

Are you an African American who’s been pulled over by a police officer for no other reason than you are driving a nice car and therefore look suspicious to him or her? You can respond with righteous indignation, and this would be justified and understandable, especially if it happened multiple times. On the other hand, you can respond in love. You can be patient, kind, and change that officer’s perspective of people who look like you based on love. Who knows, maybe he or she will think twice before making the decision to pull over someone else for the same reason.

Every human being alive today can be transformed by applying 1 Corinthians 13:4-7. Let’s start with ourselves. Choosing to live in this way might just impact everyone you meet. If enough people live like this, perhaps at least a small degree of authentic transformation may actually take place in our communities.